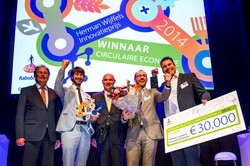 Flowid director Jeoffrey van den Berg considers the prize a wonderful acknowledgement for the new approach to chemistry that Flowid is currently working on. By combining large, often energy-guzzling and unsafe processes in the chemical sector, and executing them in a miniature setting, Flowid can make the process sustainable, efficient, and safer.

"We free processes of the technological limitations that occur when mass and heat are transferred. By shrinking them, the process becomes controllable, so we can do exactly what we have in mind."

Flowid hopes to start production at the Chemelot Campus in Geleen next year for the first time. "It’s supposed to become our very first test factory." Flowid wants to use the thirty thousand euros prize money for the development of a scrubber that degrades waste from ships.

The Herman Wijffels Innovation Award aims to motivate entrepreneurs to realize their promising, sustainable innovations. Since 2002, the prize has been awarded by the Rabobank every year. Finalists can win thirty thousand euros in three categories: Circular Economy, Food & Agriculture, and Food & Well-being. A total of six hundred parties submitted their ideas this year.