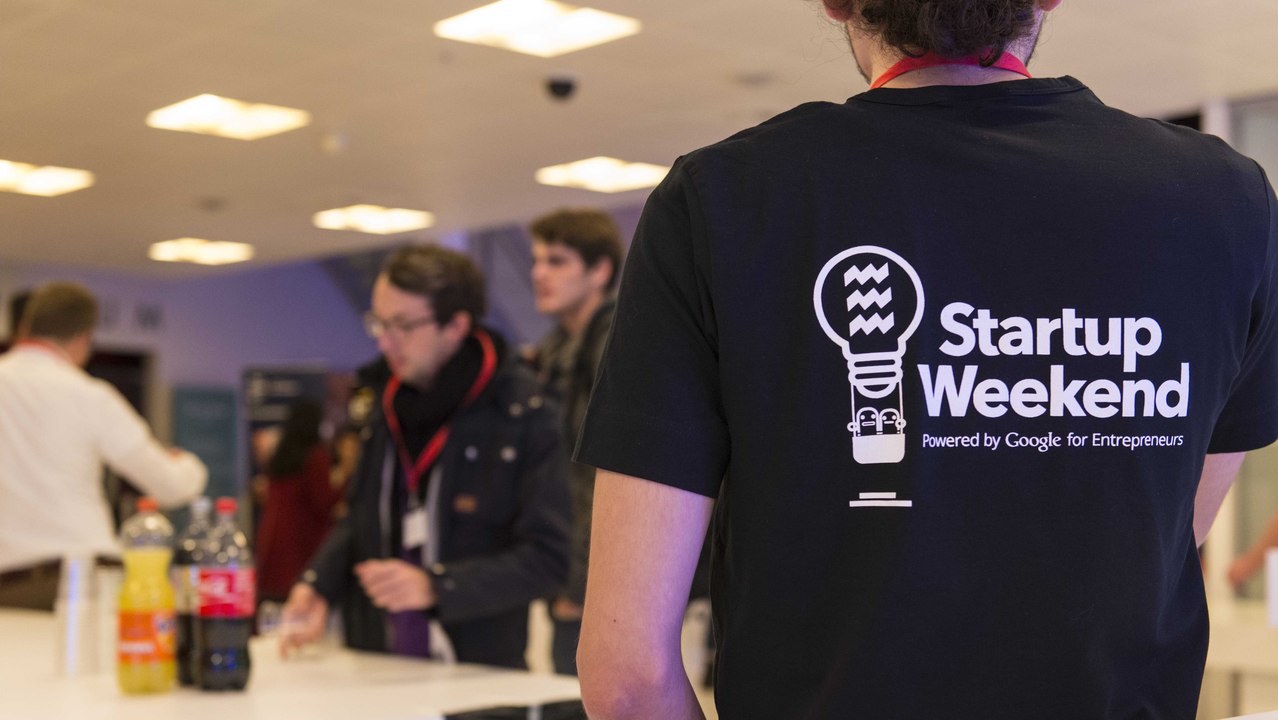 Friday evening 28 November was the start of the 5th ‘Startup Weekend Eindhoven’. The event will continue on the High Tech Campus Eindhoven till Sunday evening 30 November.

Startup Weekend is the name of the events of a global network called ‘Up’. This organization has 2000 of such happenings each year, where passionate leaders and entrepreneurs are on a mission to inspire, educate, and empower individuals, teams and communities. Startup Weekend Eindhoven is organized 100% by volunteer community leaders.

Eager people were coming in Friday late afternoon looking forward to an inspiring, brain-cracking, social but mostly fun weekend. It appeared that 40% of them has been on a Startup Weekend before but 60% was new to the concept. On the first night’s program was: pitching, voting and the formation of teams.

A total of 32 smart new ideas were pitched in 60 seconds each. The one more hatched than the other but all embodying the solution to a missing element they came across in life.

The total amount of participants, which consists of pitchers and people who will be joining the developing teams, was around 70. This is a very good number according to one of the organizers Victoria Martinez from ‘Eindhoven Startups’: "It is a very good turn-up, actually only since last week we know the total amount as people registered quite late. The complete figure of all participants, including the mentors and coaches comes to 120."

Noud de Greef (Communication Specialist), who is also one of the organizers is adding: "Most of them do come from the region but several do come from other cities in The Netherlands and we even have groupies from Germany and the UK. They crash somewhere at somebodies place, they don’t care as long as they can attend the weekend."

After the 32 pitches with idea’s like making a kind of LinkedIn platform but then just for creative people, from musicians to painters to find each other and market themselves. Or inventing a decision making tool which helps you to decide on certain issues or the idea for an app to connect to local people in your country of destination for information and site seeing when you are travelling for example.
11 Ideas were selected by counting the votes given by all the spectators. One of the popular ideas was from a young man who very well prepared his pitch. He was dressed in a farmers’ outfit and had tomatoes with him to boost his outline. His idea was having a collective green-house were many individuals would share their grow data and by that you would get excellent crop and only little produce would be wasted by learning from each other’s results.

Working teams from four to six people were formed and in the weekend to come the groups will work on the 11 ideas and will try to develop them into market fit propositions. From previous events there are several success stories, like Proxible and Withlocals among others. They have 54 hours to do that.
On day two coaches and mentors are present to assist if necessary. Also talks by for example Eugene Kaerts, Program Manager of the NextOEM, Ana Mihail, Global Community Manager at Blackbox or Hugo Ploegmakers, Director of Operations of Shapeways will illustrate the weekend with their experiences on entrepreneurship.

On Sunday more work will be done on the concepts. Workshops like ‘How to pitch professionally’, brushing up on presentation skills and the final pitches will take place. And at around 19.00hrs the best plan will be awarded with 500 Euros.

Events like this of course can’t do without many volunteers although sponsors like BOM (Brabant development society), the City of Eindhoven, EY, Shapeways, FIWARE and Brainport, just to name a few, did bring in a nice sum so costs for participants could be kept low.
Volunteer Marie Perez (Innovation Consultant) says: "I do mentoring in my daily job but I was fascinated to find out how this event was. I wanted to experience from an outside perspective. I am very interested in the content of all the affairs taking place this weekend. Assisting here is very rewarding.

The final pitches can be viewed on Sunday 30 November at 16:30hrs in the Conference Center, next to ‘The Strip’ at the High Tech Campus. Entrance is free, but please register online.

The organizing team already discloses that there certainly will be a sixth edition, probably in March or April next year.

For more information on the event see this link.