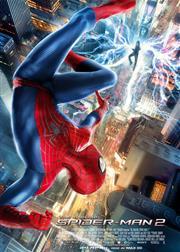 Another spectaculair film from Marvel Comics.

It’s called: The Amazing Spiderman and this movie is amazing allright. I saw it in 3D and was blown away by the graphics, technical tricks and the sparks that fly between Andrew Garfield and Emma Stone who are a couple now in real life too.

Andrew Garfield who plays Peter Parker aka Spiderman tells us about the rotating sets that made it possible to do most of the stunts himself. Really unbelievable how he wings thrue the air while spinning a web and jumps upe en down buildings. Sometimes he seems to fly, all very spectaculair when you watch this movie in 3D.

Parker has a lot on his plate; he breaks up with Gwen, who refuses to share him with his costumed alter-ego and prepares to leave for a new life in England. If that weren’t enough, he must also deal with the super-villains in sickly Harry Osborn (Dane DeHaan), a putative Green Goblin, and downtrodden Max Dillon (Jamie Foxx), who flicks a switch and becomes Electro. It should be noted that neither Harry or Max especially want to be criminals. It’s more that they feel hurt and betrayed and appear to stumble on wickedness as a last resort. Marvel’s moral universe always was more nuanced than that inhabited by the stolid likes of Superman.

In a perfect world, we’re guessing, Spider-Man and Electro may even have been friends. All being well, Electro could have been loved and respected and not set off every car alarm on every street he walks down, thereby probably making himself the most hated man in New York before he commits his first crime. But sadly it is not to be. Near the end, superhero and supervillain proceed to square off in pitched battle inside the pitch-black city.