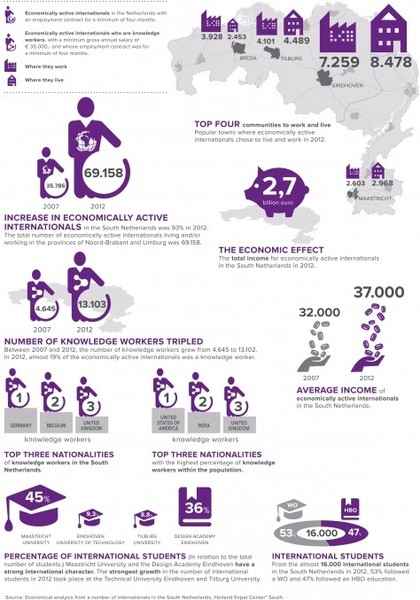 The number of international knowledge workers in Noord-Brabant and Limburg has tripled since 2007.

The total population of economic active internationals has doubled in that same period, and now numbers 70,000.

Eindhoven is the most popular city to live and work in Holland. The Financial Times announced that Brainport Region Eindhoven is in third place, after London and Helsinki, when it comes to ‘Best European region for FDI.’

The number of international knowledge workers has almost tripled to more than 13,000, while the number of labour migrants from Poland Germany and Turkey has nearly doubled to 56,000. This group of 70,000 economic active internationals jointly earns €2. 7 billion and the average wage has risen to €37,000 a year. International knowledge workers originate mainly from Germany, Belgium and the United Kingdom followed by a growing influx from USA, India and China.

Monique List, alderman Economic Affairs, Labour and Vocational Education in Eindhoven, confirmed the importance of international talent to attract companies and to fill vacancies in the technology sector. "International talent is of great importance to our regional employer," List said "It is good to see that the South Netherlands–the Brainport region in particular–attracts the world’s best talent."

Holland Expat Centre South disclosed in its own research one day after FDI. "An optimal economic business climate is a precondition for attracting international companies and knowledge workers," said Kris De Prins, Director of Holland Expat Centre South "This means not just a job or training but also information on taxation, housing, education (an international school) and culture play a role."