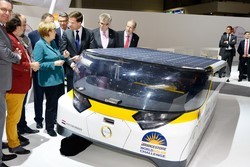 The Heads of government met University of Technology Eindhoven (TU/e) care robot AMIGO and the solar car Stella; however, they didn’t have time for a test ride.

Stella spokesperson Wouter van Loon admits that would have been a bit too dangerous "We’ve displayed it on a tilted stage, so you can’t even sit in it, let alone drive it."

"Merkel wanted to know if it was possible to paint the solar panels straight onto a car," said Van Loon. "Although it’s a technique that’s under development, it’s not yet ready to be implemented. That’s what I explained to her." He also dealt a teasing blow by mentioning the Solar Challenge final ranking to the Chancellor: Germany came in second place behind the Netherlands.

Care robot AMIGO, the other TU/e favourite, lost against Germany at the German Open robot competition; Van Loon wisely decided to the leave the fact out of the conversation.
Van Loon and Merkel talked in English. "The initial idea was to speak Dutch and have an interpreter available, but that just seemed a little silly. Mark Rutte said I had explained myself well, by the way."

The international press will be treated to a test drive in Stella and the car will be on show at Hannover Messe.