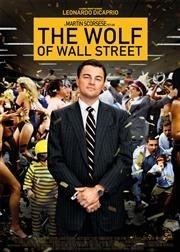 Leonardo DiCaprio should have won the Oscar for best actor in The Wolf of Wall Street. There, I said it.

I am not the only one, the social networks totally agree with me. Twitter was exploding March 2nd when the members of the Academy chose Matthew McConaughey (who plays a small role in The Wolf as well) for his part in Dallas Buyer’s Club. Matthew did a great job portraying AIDS-patient John Woodroof, but the whole acting skinny bit is slightly derivative of Tom Hanks in Philadelphia.

As a child actor Leonardo started out in television with roles in sitcoms such as Roseanne, The New Lassie and Growing Pains. After Critters 3 tanked and Leo finally got a starring role in The Basketball Diaries (1995) followed by Romeo & Juliet in 1996, not to forget his absolute memorable performance in Titanic with Kate Winslet in 1997.

Leonardo has shown to be especially amazing at his craft as of his roles in The Aviator, The Great Gatsby and Django Unchained (if you missed these do yourselves a favour and go see them). He’s known as a very intense actor who lives the part until the wrap party and is very involved in the character building and the script. When Leo was young he suffered from OCD and therefore he is very focused and likes characters with layers so he can peel those off.

Director Martin Scorsese and DiCaprio worked together for the fifth time and they made another fantastic movie.

The Wolf of Wall Street tells the true story of Jordan Belfort played by DiCaprio, a wealthy stockbroker who goes from rags to riches and back. The way up and the interesting way down.
He tries his luck at a Wall Street Broker firm, starts his own brokerage Stratton Oakmont and finds fortune in penny stocks. The sky is the limit, not only for him but also for his friends (Jonah Hill) and co-workers. They make such a crazy amount of money that it holds no value for them anymore. They throw it away like Post-its. And use it to light their cigars or snort their cocaine. Money, Power, Women, Drugs.
From the American Dream to corporate greed, his excess success and affluence in his early twenties warranted Belfort the title: The Wolf of Wall Street".

Extra reason to see this movie: Joanna Lumley is delicious as Aunty Emma, the twinkle in her eyes says it all when Leonardo misreads her body language…