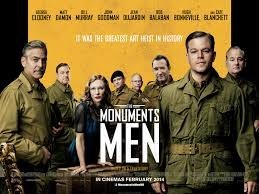 George Timothy Clooney lives by his adagio: Two for the studio, one for us. With the money he makes on the big studio-films he funds genuine masterpieces like ‘Syriana’ (2005) and ‘The American’ (2010), movies he believes should be put into the world without censoring by large media conglomerates.

Well, The Monuments Men is also one for himself and mega-blockbusters such as Gravity and the Ocean’s trilogy probably paid for it. Clooney wants to make certain films that are not always big moneymakers so he raises the funds, produces, writes and acts in them. George likes practical jokes and fooling around on set and loves to work with his friends, like Matt Damon, Bill Murray and Brad Pitt. And it shows! I’ll bet the actors had a lot of fun during the making of this film. It’s like a boys-adventure, an important treasure hunt you might say. Brad will be sorry he wasn’t there this time.

Based on the true story of Richard M. Edsel’s book, The Monuments Men tells the tale of a group of curators, museum-directors and art-historians that goes behind enemy-lines to steel back the art that Hitler’s men confiscated from museums and Jewish art-collectors all over Europe. The Nazi’s destroyed most of it while some of it was kept for the Hitler Museum. More than 5000 pieces of the best artifacts were stolen and stored in castles, mines and caves.

U.S. president Franklin D. Roosevelt tasked this unlikely platoon to prohibit the destruction of thousand of years of culture by the Germans. Clooney as Frank Stokes leads the gang of middle-aged men with Damon as Granger; John Goodman plays Garfield with Murray as the funnyman Campbell. With a special shout out to Mr. Hugh Bonneville who completes the great cast of men risking their lives to protect mankind’s greatest achievements.

Cate Blanchett plays the French spinster Claire Simone based on Rose Valant who worked in a museum and kept records of what the Nazi’s pilfered. She makes every character she plays believable, like a chameleon (and Meryl Streep) she finds just the right tone and facial expression. A tiny bit of a romance with Matt Damon and she shares her valuable information with him and his associates.

The Monuments Men is a feel good movie because in the end all is well. And that is the way it should be, for the studios and for George.