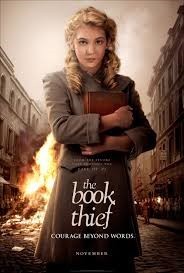 The Book Thief is a very strong film that will give you a lot to think about. It is a story about the time period just before the 2nd World War as seen from the German perspective.

When we think of Nazi Germany, we think of Hitler spewing his mad rants of hatred, and oversized blood-red banners hanging from buildings, and men with swastika armbands committing unspeakable atrocities.
We don’t think so much about the normal German families.
In this film you get to see how not all Germans agreed with Hitler and that life was hard for them too.

The film is an adaptation of the popular young-adult novel by Markus Zusak with a special mentioning for John Williams for the great score.
The plot centres on Liesl Meminger (Sophie Nélisse), a young girl who is adopted by Rosa and Hans Hubermann, a childless couple from a small, poor town called Molching (near Munich).
Liesl’s new mother (Emily Watson) is cold and a killjoy, while the father (Geoffrey Rush) takes an immediate liking to the young girl whom is adopted for the money and when Liesl shows up without her brother her new mother is therefore very disappointed.
But she warms up to Liesl and she even lies for her later on.

In her new home, Liesl learns to read and thus escapes from the horrors of war into classic literature. Her new father writes words on the wall in the cellar and she finds a friend who let her use the library. Later, the family takes in a Jewish fugitive called Max (Ben Schnetzer), who hides in the cellar and encourages Liesl to write.

I think this is a film teachers should show in class. This film is so honest and intimate what makes it a wonderful piece of cinema for young and older.
The importance of art, books, the freedom to access it all whenever and wherever. Highly recommended!
Go see this film with your (grand)kids and bring tissues.