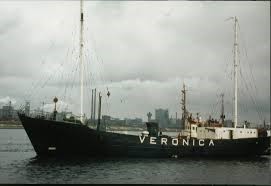 Radio Veronica has strong ties in Brabant. Eindhoven’s own star Peter Koelewijn (Eindhoven 1940) had a very big hit with his song ‘Veronica Sorry’. Tony Vos (Eindhoven 1931), the famous saxophone player and Jazz- musician was one of the first DJ’s at Radio Veronica. He was married to the first female disc jockey Tineke de Nooij.

Who remembers Radio Veronica?
If so: you must be a fan. If not: let me fill you in.
It’s kind of a romantic story actually. In the seventies it was not allowed to have a commercial radio station in Holland and pop music was not played. Radio Luxembourg was a possibility but in those days the reception was apalling. You had to stand outside with foil on your head on a balcony with a wire clothes hanger….well, you get the picture.

A couple of clever guys (the Verwey Brothers) came up with a solution: they bought a ship (The Nordeney) and sailed it out of the Dutch territorial waters so the Dutch Laws would not apply. From 1960 until August 31st 1974 the dreadful day it all ended. We all remember it so well, a sad day in The Netherlands.

The radio shows where made in Hilversum and the disc jockeys put the tapes in big plastic containers. Every week a delivery on The Nordeney and sometimes when the weather was good the jocks would go too. They invented the jingles for every show or DJ its own tune and the drive- in shows on the mainland.

Actually it was a bit of the elephant and the mouse, Veronica being the mouse and the elephant the Dutch government. And everybody likes the mouse. Veronica became extremely popular, to this day the Dutch know the jocks and their favorite programs as ABTT with Ad Bouman and 123456789… Tineke (de Nooij) Joost Den Draaier (Joost mag het weten) and Lex Harding’s Top 40 just to name a view.

The travelling Veronica drive-in shows came to every town with the popular DJ’s and you could ask you favorite record to be played. The jingles where the same as on the radio and made it all very recognizable. Those jingles are amazing and will never bore you till this day.

The fans are very loyal and they visit every Veronica event. Each year lots of people show up and buy memorabilia and meet their hero’s. April 19th is the next Veronica event at the Nordeney that is docked at the Amsterdam (Noord) harbor near NDSM.
The Veronica Museum in Hoek van Holland (RockArt.nl) is a delightful place to go back in time..time.. time…..

If you can get your hands on this movie: The Boat That Rocks/Pirate Radio (2009) with Phillip Seymour Hoffman and Bill Nighy you will completely understand where the fascination with Radio Veronica comes from.