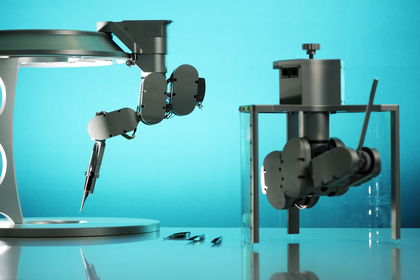 Mechanical engineer Raimondo Cau has developed a new robot for microsurgery. The robot enables surgeons to operate with five times greater precision than by hand; Carrying out highly precise operations requires a very steady hand and a lot of concentration.

Operations to attach blood vessels and nerve fibers to new tissue require such high precision that only a small number of surgeons can carry them out successfully. This places such high demands on surgeons that few are able to do surgery continually and means long waiting times.
Patients who need operations for example after a serious accident.or for the removal of a tumour can easily be asked to wait several months, and in some cases even more than a year.

Prof. René van der Hulst, plastic surgeon at the Academic Hospital Maastricht (azM), asked TU/e to find a solution to this problem. Mechanical engineer Raimondo Cau took up the challenge, under the supervision of Prof. Maarten Steinbuch. After observing numerous operations and holding discussions with micro surgeons, Cau built a working prototype that is five times as accurate as a human hand. "This is a tremendous step for microsurgery", says Van der Hulst. "Especially because we can see that there is an increasing need for highly precise reconstruction operations such as microsurgery and breast reconstruction."

The robot has two joysticks operated by the surgeon. The movements of the joystick are ‘scaled’ to match the arms of the robot, which contain tools for the operation and this allows the surgeon to select the degree of scaling. The robot also filters out the surgeon’s unsteady hands, and gives the robot arms an extra strong response to contact.

This robot will enable more surgeons to carry out highly precise microsurgery, and will allow waiting times to be shortened. The robot also reduces the physical burden on the surgeon. A third benefit is that the robot will make new and more precise operations possible, such as difficult reconstructions of the hand or face. The prototype will now be further developed together with azM, and the results of the first clinical tests are expected within the next year.

Raimondo Cau will gain his PhD on 5th February for his thesis entitled ‘Design and Realization of a Master-Slave System for Reconstructive Microsurgery’..