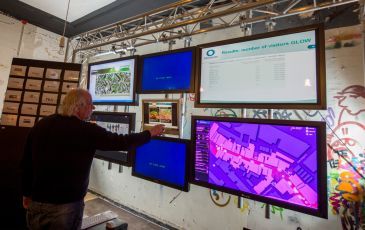 On the horizon glimmers a drastically automated and connected world. But before that happens, what can we expect in the short term?

Welcome to Technium, the name Kevin Kelly, editor in chief of Wired, uses to indicate this era in which technology is playing an increasingly important role in our lives.

1 | Print Anything
The 3D printer is advancing, due to the increase in the number of easy to process materials (various plastics, metals and precious metals) and user-friendly design tools. In addition to the digital sculptures by consumers, we also see interesting developments in the professional circuit. For example, last year, University Medical Center Utrecht revealed on the Campus new information about printing new bone structure out of organic material, including stem cells. The Californian professor Behrokh Khoshnevis shows that building a new house will soon be just a matter of pushing the ‘ctrl- P’ button.

2 | Big Data
Data is hot. We produce mountains of information. The collection and analysis of all these data will increase significantly and lead to new applications. Amazon, for example, wants to deliver packets before they have been ordered. Philips is collaborating in a Living Lab in Eindhoven’s famous entertainment area Stratumseind. The project is aimed at promoting security, cooperation and economic sustainability.

3 | Our mechatronic friend
Robots are advancing. In the living room, the office and the hospital. For example, a group of students at TU/e is working on perfecting PRECEYES. This robot will soon be the best eye surgeon in the world: it will be able to perform very precise medical interventions while keeping its ‘hand’ absolutely steady. Amazon is working out plans to use drones for the delivery of orders. A major enabling technology for the breakthrough of the robot comes from, among others, TU/e and Philips. They have recently launched RoboEarth, the Internet platform enabling robots to learn tasks from each other.

4 | The AR experience
In the coming years, more and more professional applications will be developed in areas where recent Augmented Reality experiments mainly focused on the domain of entertainment. For example, SAP in collaboration with warehouses is experimenting with pick-by-vision. With the help of Google Glass, order pickers can see at a single glance where the order in question in the warehouse is located, which increases the speed and reduces error sensitivity. Also in hospitals Google Glass is subject of research. Philips and Accenture are teaming up in putting the smart glasses to work for surgeons and other medical specialists.

5 | Biomachines
After drugs and surgery, health science finds itself increasingly aided by technical disciplines such as chemistry and engineering. With the exception of artificial hips and pacemakers, this area is still relatively unexplored. However, TU/e, Erasmus MC and University Medical Center Utrecht are working on iValve, a living heart valve that after implementation grows on in the body, breaking down its scaffold and allowing the patient to have a completely new heart valve identical to the body’s own valve.