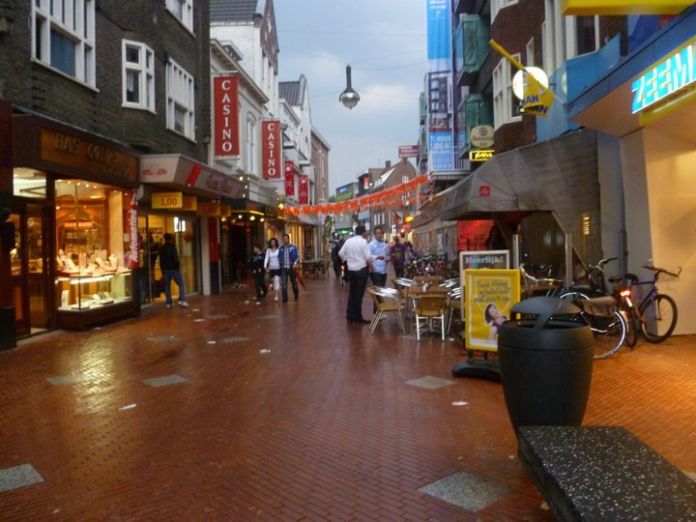 he moved immediately and I stayed behind to sell the house, close out our affairs and let my daughter finish out her year in school. He found an apartment about a block from Stratumseind. I liked to call it his bachelor pad or his man cave because it had no hint of girly in it. It had 2 bedrooms, a living room, kitchen, 2 patios and typical Dutch stairs. The man cave was 2 stories and when I came over to visit I actually had to hold on to the steps to crawl my way up because they were so steep. Descending the stairs was another joy all in its own. They were so narrow you had to position your feet sideways so that you wouldn’t scrape the back of your heel. I’m not very good at adjusting to jet lag. All I want to do is sleep. Several people I know just go on like there’s not a problem. After my nap in the car on the way from the airport, all I wanted was a bed and to sleep for days. I closed my eyes, my head pounding and eyes glazed over. I could actually hear the thumping in my brain! Or at least that’s what I thought at first. As I emerged from the cold dark bedroom, climbed the mountain of stairs and stumbled my way to the living room I found my husband there calmly watching TV. Horror on my face…. did he not hear this noise? Had he gone deaf? WHAT is that noise? “…… Oh, that’s Stratumseind.

“Most of Eindhoven had been destroyed during the war. Stratumseind is a street in Eindhoven. It’s actually one of the streets that the Allies marched down after they had liberated Eindhoven. Thousands of grateful Dutch lined the streets to offer thanks to their heroes. Now, thousands of people descend upon this street every week to relax and party. During the week, the street is relatively calm, but from Thursday through Sunday, Stratumseind is absolutely packed. Close to 35,000 people pass through the street of Stratumseind every weekend. The celebration begins on Thursday evening with student night. College age kids and also military from the local base like to come out that night. Friday and Saturday night are when most of the high school kids are hitting the street and on Sunday… are you kidding me? I’m definitely not in the Bible belt anymore Toto!This past year, my husband and I attended an introduction to night life on Stratumseind. It was an education night for parents of teens. We started at a youth center and then traveled in groups to three different bars and a police station. Each bar was basically empty as we began around 7pm. Most of the action doesn’t even begin until midnight. Bars stay open till 2am during the week and 4am during the weekend. At each location we were educated on what the teens are being served in the bars and what to expect as for safety of the teens.Stratumseind is the longest street in The Netherlands of its kind.

There are around 55 pubs or clubs within a 300 meter area. Most of the pub or club owners are part of an association, working together to keep people safe and to keep them from being fined. If something goes wrong, like underage drinking or something like that, the club owner is fined, not the child. Usually a letter is sent to the parents telling them that their child was on Stratumseind. But the police admitted that some parents tell them, yes they know that’s where they were!! Around 15 police are stationed to this one 300 meter area on the weekends. They are positioned on foot, horse, bike and some with dogs. They basically stick to the street. At the doors of the clubs are bouncers that go through training with the police on what to be looking for and keeping the people safe. One problem is that once a person is certified, they are certified for life. Hmmmm???

What I did learn is that, like I said before, raising a teen here is very different. It doesn’t mean it can’t be done. It means a little adjustment and knowledge is needed. We did prepare her before we allowed her to go out. She doesn’t go out alone and she is never alone while there. We have a discussion before and after my daughter goes out. She does have a curfew; we’ve had to adjust that one a bit, but there is no way she is staying out till 4am. Keeping in touch and listening to your child and their friends is so important whether you are living in The Netherlands, America or wherever. Stratumseind is the heartbeat of Eindhoven. Like it or not, it’s the way life is here.[nbsp] Informing myself and my child is how I will be able to keep her as safe as possible. Oh and this information from the Police… Pot is not legal. But it is seen through an open eye or as we call it..turning a blind eye. This American Girl’s eyes are wide open!