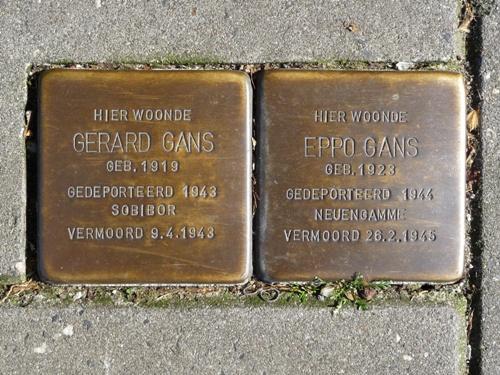 This past weekend, my husband and I invited a couple over that had just arrived in The Netherlands. We began to chat about our experience so far and they chatted about their lives and what they were enjoying about living here in Eindhoven. They live right in the center of Eindhoven, in a home that is part of a building that used to be a school.

The home is tall with four floors. They then asked if I had ever noticed the little plaques that are apparently all over the city. I had never heard of them and they told me that their real estate person had just randomly told them. This peaked my interest and by the next day I went over to my friend’s house to walk around to see what we could find.

All over Eindhoven, in the pavement or walkways, are small bronze 10×10 centimeter plaques. Each one is in honor of a victim who was murdered or perished during World War II. The plaques are located at the place where the person lived last. The ‘Stolpersteine’ or Stumbling Stones were made by an artist named Gunter Demnig. On each stone is the person’s name, the fact that they lived there, their birth date, deportation date and date of death.

The idea is so when someone passes over one of the stumbling stones you will pause and reflect about the people who perished. It’s not about the fact this was a horrific time in history, it’s about each individual person, the actual people who were taken from their homes and their communities and disappeared into Hell. The ‘Stolpersteine’ are not only in Eindhoven, they are located in many countries in Europe. Germany, Italy, Austria, Hungary and The Netherlands are the home to these beautiful little individual monuments. Are there millions of stumbling stones scattered across Europe like the millions of victims that were stripped of their independence, freedom, liberty and eventually their lives? No, but there are over 30,000. Each installed by the artist himself. Gunter Demnig’s project is the world’s largest memorial. Who am I to be telling this story? Nobody! Just an American Girl who has moved to Eindhoven and has discovered a story that needs to be shared.

So the next time you’re walking around and you “stumble” upon a little bronze plaque in the stone, take a few moments to read, reflect and say a little prayer for someone who had their life taken away from them.A person is only forgotten when his name is forgotten ~ Gunter DemnigWebsite for finding the Stumbling Stones in Eindhoven The Netherlands http://en.tracesofwar.com/article/27536/Stumbling-Stones-Sint-Catharinastraat-4.htm