Home NEWS Queen’s Day: Is This the Real Life? 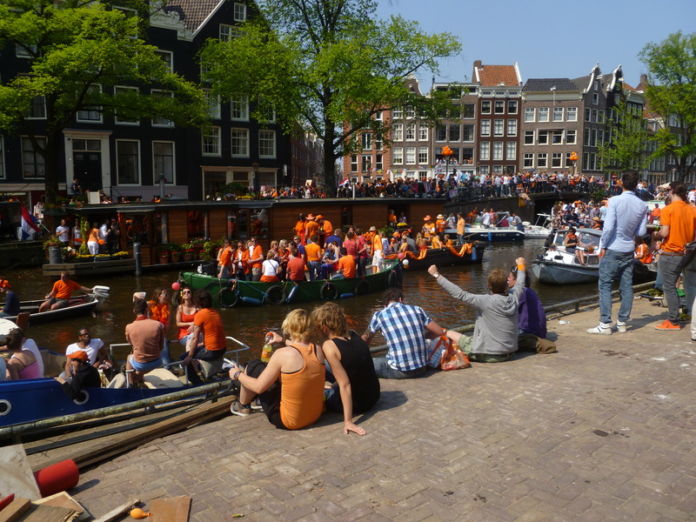 In anticipation of our last Queen’s day, or Koninginnedag, before Queen Beatrix hands over all royal duties to her son Prince William Alexander on April 30th, I thought I would reflect back on the two short Queen’s Day celebrations I had since moving to The Netherlands.[nbsp]

Back in April of 2011, my daughter and I came over to The Netherlands to visit her new school and to find a new house. Our trip ended with a day in Amsterdam. This city, which sits on the North Sea, has many canals that wind their way through the tiny streets. There are thousands of bikes lined up and parked all over. I quite honestly have no idea how each person finds their own bike or remembers where they’ve parked their bike. I do know that bikes are stolen here all the time. I guess it’s a little give and take philosophy. I’ll take yours but I’ll give you mine, if you can find it.

On a normal day, Amsterdam is a busy city of over a million people. We happened to visit the city on the day the whole country celebrates the Queen’s birthday. This day is called Queen’s Day. We took a train into the center and couldn’t believe our eyes. First of all, no one sent us the memo that wearing orange is a must! It’s the color of the royal family and all of Holland wears it proudly. Second, this was the party of all parties … EVER! The beer was flowing, the vendors were busy selling their wares, the children were in carnival ride heaven, and people everywhere were all over the streets, canals and literally hanging from the windows.

A day to party…. You bet! But I had one more quest in mind. I wanted to visit Anne Frank’s house. The line to get in was short. We entered knowing there were no photos allowed to be taken. I could not help the thoughts that were running through my mind. This was one little girl’s story. This one brave little girl, wrote down her inner most thoughts and prayers. Her courageous father, who had the heart to share her story with the world, not knowing what a huge impact his little girl would have on the world.[nbsp] I couldn’t help but notice the sick comparison that I was in the middle of. Outside, there were thousands of people celebrating and going about their normal life. Inside, not one person was speaking. Not one person walked with heavy steps. Not one person dared to make a sound. It must have been like the insanity of Anne’s little life in that house before her death. This was one story, but there were many, many more that were left untold.