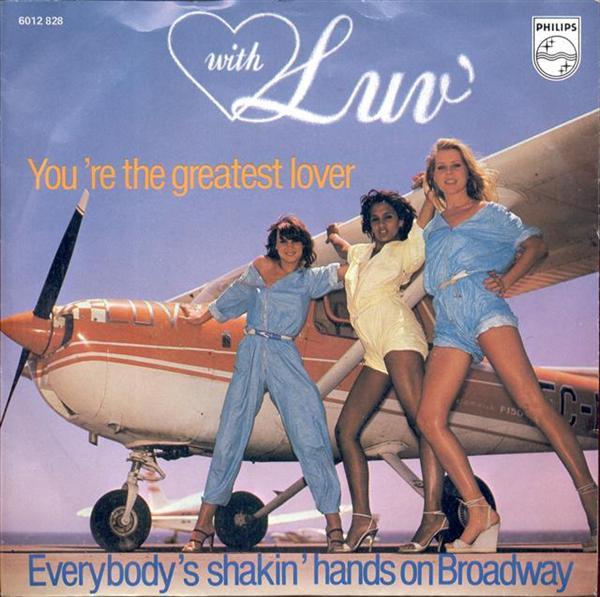 According to the Journalism Handbook (yes, it exists) the definition of a celebrity is somebody who is very famous, but no one actually knows why the person is that famous. Some examples are – of course – Kim Kardashian, Katie Price and Paris Hilton, though Hilton nowadays is called a ‘socialite’, probably to avoid the negative connotations of the word ‘celebrity’.

For most young people and non-Dutchies, Patty Brard would be the penultimate celebrity. She appears in all sorts of television programmes (Sterren Springen op Zaterdag, Sterren Dansen op het IJs, Ranking the Stars), but why exactly? Well, she used to be a singer. Until 1981 she was a member of the famous Dutch girl group Luv’ that scored several major Dutch top-40 hits. The trio was formed back in 1976 by the producer Hans van Hemert, looking for three girls with different looks that fitted nice together: José Hoebee, Marga Scheide and Brard.

To put it mildly, Luv’ was a huge success. The group scored several big hits like ‘U.O. Me’, ‘Trojan Horse’ and ‘Casanova’. But the biggest hit of them all was ‘You’re The Greatest Lover’, a lightweight pop song that topped the Dutch charts for five weeks. It was a huge hit in different European countries, reaching the number one position in Germany and even reaching the South-African charts. And since 1978 – the year it was a hit – it has been played endlessly at Dutch radio stations, though nowadays mainly during the ‘Foute uur’ on Q-music. It is not a song to be taken too seriously.

After Luv’ were finished the three members had some success with their solo careers. Hoebee was the one with the most success – she had a nr. 1 hit with an eighties disco version of I Will Follow Him – probably one of the worst singles of the eighties. But it was Brard who remained in the spotlights, albeit by filling the gossip magazines and tabloid newspapers with all sorts of stories about relationships, some worse than others. In 1993 she was declared bankrupt because a former lover had made some bad business investments under Brards name. It was the main reason she started producing television programs.

Her appeal is evident: she is completely shameless. She doesn’t mind being made ridiculous (what else would you think of a woman that makes a television show about her enema?) and doesn’t mind insulting other people. Never a dull moment when Brard is around.