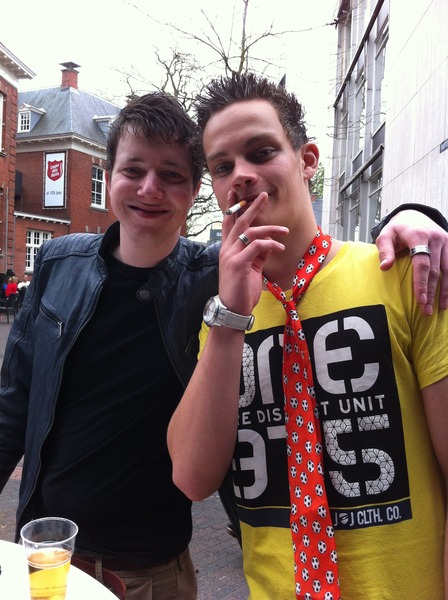 Don’t know the Dutch much? Well, then strike up a conversation.[nbsp] The Netherlands celebrates the Queen’s birthday on the last day of April. Her birthday is actually earlier but we celebrate this date in honor of her late mother. After spending our first year in Amsterdam for Queen’s Day, this past year we decided to stay in Eindhoven. This was a perfect day to get to know the local Dutch.

Let me say this… The Dutch know how to party. 99% of the people were dressed in orange, the color of the Royal family. The drinks were flowing and the people were all mosh pitted together all trying to have fun! Concerts can be heard throughout the city or DJ’s jamming out the latest tunes. Bars blare their music beckoning you to come sit at their joint. I had snagged us a tall bar top table outside on Dommelstraat at our favorite local pub, Dommel 18. As we sat there taking in the sights and fun of the party goers drinking our beer and trying to catch up, two young men came by our table smoking cigarettes. Now mind you it’s standing room only in the streets. People are wall to wall walking, talking and having fun![nbsp] I saw them smoking so I pushed an ashtray over for them to use. They kindly accepted and started talking to us. Three hours later, I can say that I definitely know more about the Dutch than I did before, at least through the eyes of two 19 year old men.

As Ties and Bart puffed on their cigarettes, I remarked that it seemed like a lot of Dutch smoke. They said that yes, 60-70% of the Dutch smoke! (stat on the web from Radio Netherlands Worldwide… 25%). They said that at 16, a person can purchase cigarettes. Wow, I said,[nbsp] that seems very young! They told me that it’s ok for them to smoke but if they had a girl friend or were married they would not want her to smoke, especially if she were pregnant.
Ok, so let’s open this can of worms…-[nbsp] Pot?! Bart and Ties… “ Ahhh yes we smoke pot. It’s good for you![nbsp] If you smoke pot once a month your blood flows better.” They said,[nbsp] “ Take a man in a high stressed[nbsp] position, if he smokes pot once a month he will be more relaxed and not[nbsp] be inclined to have a heart attack.” Someone at the table says “Who wants another round?” All hands in the air! And Proost!

“Speaking of pot”, says Ties, “We just got our Weed Pass”.[nbsp] “Oh really? What’s that?” I asked. ‘’Well, starting May 1st in our area, people can get a Weed Pass. Like a members only pass at clubs or coffee shops.”[nbsp] Apparently people from other countries come here to buy the marijuana and then return to their countries to sell it. Here’s another Bart and Ties stat… 70% of all Dutch smoke pot! (Wiki stats.. 9.5% young adults in the Netherlands).
All in all, a very educational fun day spent with Bart and Ties! A few more things they would like us all to know… Bitterballen… made from horse meat! And Tom Jones is the bomb! Sex Bomb that is! I love it! Teens in America would probably ask “Who the Hell is Tom Jones?”
“The great thing about The Netherlands is the liberty to make your own decisions. You have to be responsible for your own actions”, Bart said.

Thanks Bart and Ties for a wonderful Queen’s Day!