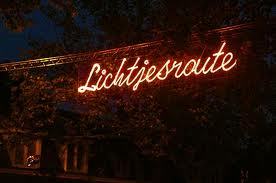 Last year, as we adjusted to life in a new country, we were amazed at all the different celebrations that went on in and around our city of Eindhoven. Nothing was mentioned about Halloween, except by the American friends I have.

For some reason there seemed to be two Christmas celebrations, one at the beginning of December and one at the end. There was a Valentine’s Day. But don’t even get me started about not having Ground Hogs Day. I really like having Punxsutawney Phil to tell me what the weather will be like between winter and spring. I remember driving around in the fall and seeing lights displayed here in Eindhoven but not really understanding the meaning of what was happening. But this year, with my head a little more clear, my ability to read a few signs and the graciousness of good friends to enlighten me about events around Eindhoven, I was ready to celebrate the Lichtjesroute.

The Lichtjesroute is a festival held every year to celebrate the liberation of Eindhoven during World War II. The celebration begins on the date the city was liberated, September 18th and ends this year on October 14th.During World War II, Operation Market Garden was an effort when the Allies tried to capture three bridges that would help them break into Germany. The plan did not work and as the route from Eindhoven to Arnhem was known as The Corridor, the paratroopers renamed it Hell’s Highway. The plan may have been a failure but for so many grateful Dutch people, the gift of their life or the lives of their loved ones will never be forgotten. In my search of the history of this festival I came across a name and some pictures. What I discovered has moved me beyond words. [nbsp] In 1944, in Eindhoven, there was a beautiful young family by the name of Van Slooten who took into their home a Jewish friend to hide from the Nazis, a crime punishable by death. They were betrayed but Mrs. van Slooten sensed that something was wrong and that the house was being watched. With the help of the resistance they were able to move the friend to another safe house. One or two days later, the Van Slooten house was raided by the Nazis. They found nothing but took Mrs. van Slooten to prison and kept her there for ten days interrogating her every day. She was seven months pregnant at the time with her second child and was terrified. She had heard rumors of the terrible things the Nazis had done to pregnant women in the concentration camps. She had no idea what had happened to her husband or two-year-old son, Erik.

Then suddenly she was released, but a sympathetic Dutch policeman told her that she should go into hiding herself, because she would be arrested again the next day. The Nazis did that to break your resistance. So she could not go home and stayed with friends, not knowing what to do or where to go, and without medical help for the last months of her pregnancy. And then suddenly Eindhoven was liberated by the Americans, so you can imagine how happy she was!This story was shared with me by the son who would be born two months later, René. His father took pictures during the liberation and he is sharing them with us. René spent years to try to identify the American soldiers in those pictures by showing them to American veterans who came to Eindhoven every year during the celebration festivities around September 18th. And six years ago, one veteran recognized Lt. Herbert Viertel on one picture, after which the veterans organization told him that he was still alive and lived in Florida with his wife Peggy who had been an Army nurse during the war.

When he finally got him on the phone, it was very emotional for him and his mother. His mother died in 2008 and Herbert Viertel died in 2009. René wrote an obituary for him that was read at his funeral. René van Slooten also wanted to convey this message as well:I wanted to express my gratitude, so in 2008 I have adopted a grave on the American cemetery ‘Henri Chapelle’ in Belgium and a name on the ‘Wall of the Missing’ at the American cemetery ‘Margraten’ in Holland. The grave in Belgium is from Lt. Rodney Renfrew from Coshocton in Ohio, killed on 10 February 1945 in Germany. And the name on the ‘Wall of the Missing’ is Capt. John Doherty from Buffalo, NY, missing in action in Holland on 18 September 1944 (the same day my parents were liberated!). I was so lucky to find both families and they are very happy that people in Holland still remember and care. Doherty’s wife was still alive in 2008 and after 64 years she still had no idea what had happened to her husband, so I was able to find out for her where her husband was killed and why his remains were never found. She was very happy to know that at last, and she died in peace last year, but I am still in regular contact with Doherty’s granddaughters who live in Los Angeles. And last May I went to the Henri Chapelle cemetery to celebrate Memorial Day with two members of the Renfrew family. It was very impressive. If you get a chance, you should go to ‘Margraten’ cemetery next year on Memorial Day. It is only an hour’s drive from Eindhoven. Memorial Day there is very impressive, because all 8,300 graves have been adopted by Dutch families and they come to bring flowers. Last May, I took a picture of a Dutch father and his young daughter, who bring flowers to ‘their’ grave at Margraten.

We will never forget what the United States of America did for us. As I look back to that night I drove around looking in awe at the beautiful lights that lit up the streets in Eindhoven, I’m now in awe of a story of a beautiful, courageous, young mother who was brave beyond belief. To the young men that came to her rescue so that she and her family could live a life of freedom, thank you. And to René… Thank you so very kindly for sharing your story with this American Girl. René said: “The little boy in front is my brother, 2 years old at that time. WhenI showed the picture to some veterans on the 60th anniversary ofthe liberation (in 2004), one of them recognized the officer on theright as 1LT Herbert Viertel, B Company, 1st BN, 506 PIR.”

René said: “This is my mother with my brother Erik (born in 1942). My mother wasexpecting me for 7 months at that time. I was born on 20 November,and she often told me that she could hear the guns during the Battleof the Bulge when she had to get up at night to feed me. In the backyou see an American and a British soldier having a relaxed conver-sation leaning against a scout car. At this time the Americans werealready getting worried about the slow British advance.”