Home NEWS Between Nosiness and Interest 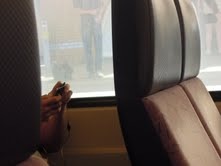 Recently, I travelled to Den Bosch. I love public transport. Endless dozing, reading books, working on reports or dreaming away. Gazing out of the window, I heard people talking. In a same tone of voice, I find it reassuring and helpful to nod off. Not this time. Loud voices kept me awake, whether I liked it or not.

How I hate those shrill shouters. They never seem to stop. Don’t care to be overheard, maybe they are even cráving to be heard all around. At the end of the path, a father was shouting his heart out to his children. Next to me some friends were noisily sharing their daily events, notwithstanding sitting close to each other. Behind, a girl was yelling to someone at the phone.

Sleepily, I felt forced to listen to snatches of conversation about food, timetables, love lives, sorrows. Normally, it gets me annoyed. Now, I gradually gained some secret pleasure in trying to understand the storylines. Especially the mobile talk got my fantasy going about the lives of those unknown. What they were quarrelling about? Who was the boyfriend at the ‘other side’, trying to mend whatever was broken. Apparently without success. Was he tall, young and nervous? Or rather a shy guy behind his computer, unaware of messing up the chance to make up and now made her feel sad and lonely? I smiled.

Suddenly I realized, that my endeavors to understand what was going on, were almost the same as my attempts to get grip in a new country, place or group. I did it so many times, surviving by trying to grasp meanings out of for me incomprehensible blabla, putting ‘odd’ behavior in meaningful contexts. With a grin to cover my anxieties! I even recognized the change after a while, when excitement to try and understand the new codes suddenly turns into getting bored again and let it all just become what it was, an undecipherable blur of noise.
Gradually, I sunk in a wary mist of half sleep, only listening to my inner voice, making practical ‘to-do-lists’ in my mind, philosophizing about life decisions to be made and almost fell in a deep soothing sleep.
Then a harsh announcement: ‘Den Bosch’. In one second, I dragged myself out of my lovely lazy leisure and jumped out of the train. Just in time. Back to my own reality.