Home animal welfare Listening to the heart of your dog

Dwarf poodle Wolfje fell victim to a pack of huskies last week. During a walk on the Vrachelse Heide near Oosterhout, the dwarf poodle was bitten to death by the Huskies, in which the dog’s sitter was also injured. What can you do as an owner if your dog is attacked? And is it preventable?

We asked two expert opinions. There are several things to consider. According to dog behaviour therapist Marilyn van Dommelen, owners do not always have enough knowledge about their animal. “They often look at their dog through rose-colored glasses. As a result, they unintentionally do not assess situations properly.” For example, it can happen that owners do not recognise behaviour that is on the edge.

Growling is part of playing

Van Dommelen thinks it is important that owners learn to understand the ‘language’ of their dog: “There is a lot involved, but it is so important. If you understand your dog, you can recognise unpleasant situations and prevent incident.” For example, you know when to bring your dog to safety, for example by getting out of the way. “Growling can also be part of playing and is not necessarily always a sign of conflict.”

Dog behaviourist Michelle Post also emphasises the need for a good upbringing: “People often refer to certain breeds, but it depends on how the dog is socialised and trained. A puppy doesn’t think: later when I grow up, I’m going to attack other dogs.”

If you see that other dogs are coming and an attack on your dog is imminent, it is best to lift them up. If your dog is already in the group, you can try to take him out and keep him far away from the other dogs. “But you also have to keep an eye on your own safety.”

Much more often it happens that two dogs fight with each other, or that one dog attacks another. “Then you have to lift the dog that is biting on the collar so that their legs come off the ground. As soon as the attacker gasps for air, turn him away. Then you have to keep the dogs away from each other.”

If the attacker bites your dog and then does not take his jaws apart, you need to put a stick between the jaws and to then pry the mouth open. “But you should never pull the dog, because then the bitten dog runs the risk of crack wounds.

An attack by a group on one dog, according to Post, is rare. “With the dwarf poodle and the huskies, there seemed to be a ‘hanging up’. The group goes wild on one dog and they do not stop until the victim is dead. Such a small dog has no chance.” 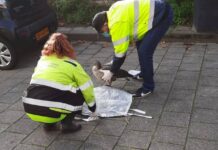