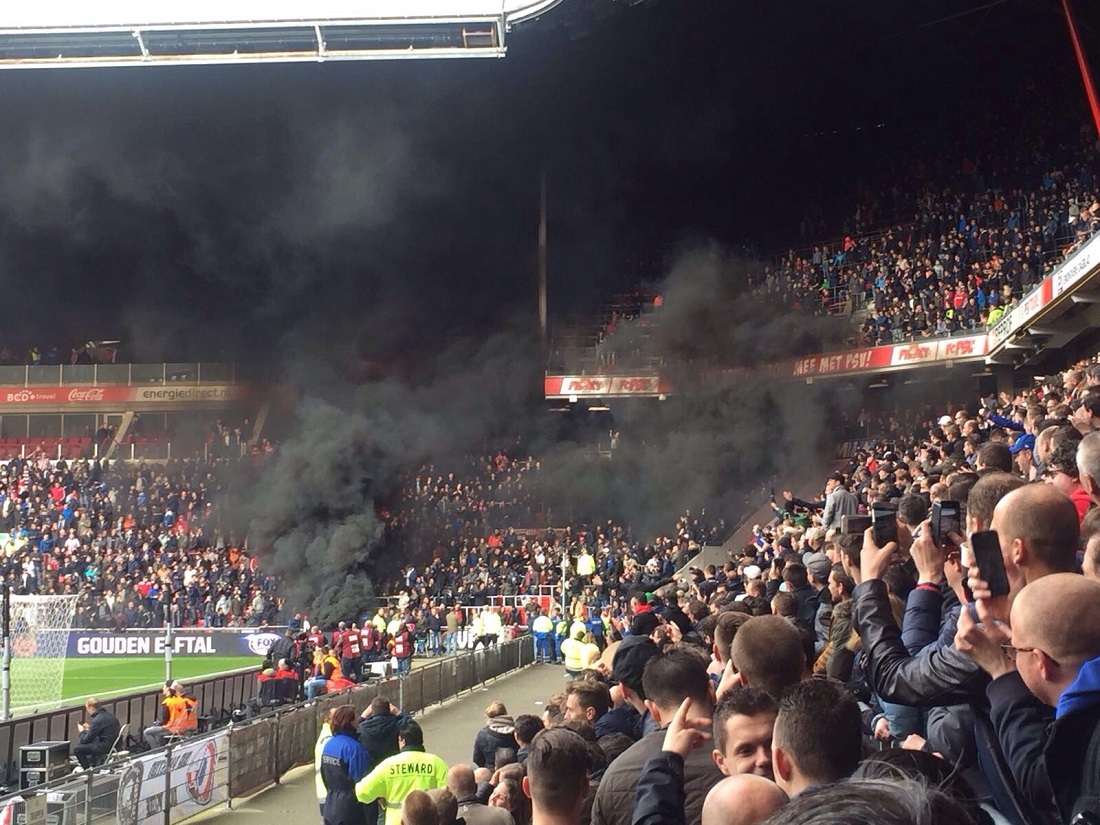 PSV did what they had to and beat Ajax at the Philips Stadium. Apart from satisfaction about keeping the three points in Eindhoven, the board is furious about the smoke bomb-incidents. They have said to catch the offenders, punish them with a long-term stadium ban and have them recover damages.

In a sold Philips Stadium, PSV knew they had beat main rivals Ajax in order to keep supporters satisfied for what turned out to be an unsuccessful season. Starting with Jürgen Locadia as striker instead of the injured Luuk de Jong, and Steven Bergwijn and Gastón Pereiro as wingers, they started the game with a lot of energy towards the Ajax-goal. After 25 minutes, this resulted in a free kick, which was turned to gold by Locadia. Ajax wasn’t able to react to this and looked still tired from the 120 minutes against Schalke, last week Thursday.

The second half wasn’t too good, but really turned ugly when a smoke bomb-incident took place at the U-corner of the stadium. Supporters had put on banners to protest against stadium bans, and now lit smoke bombs to accompany their visual statement. Thick black smoke crawled up to the UU-corner on top, the family-corner, causing panic to kids and their parents who started running to the gates. After it became clear to them that it wasn’t fire, but smoke bombs causing the smoke, they got back to their seats. Some ten minutes later, a new smoke bomb was lit. Thousands of supporters now reacted by hissing at the culprits to express their condemnation. A total of fifteen people were treated for health issues caused by the smoke. PSV’s directors are furious and have said to catch the offenders, punish them with a long-term stadium ban and have them recover damages. You can watch a video of the incident here.

The match continued and saw Ajax pressing on, but not create real chances. Locadia and Justin Kluivert had some words after Kluivert seemingly kicking Locadia, which caused a little riot, but no red cards were handed out to restore order. PSV defended well and even got an opportunity in the very last minute to score the 2-0 after a fantastic rush from Brenet from his own half, but he saw his shots blocked twice. Immediately after, the final whistle put the game to an end.

In an interview after the match, Locadia called Kluivert a snot-nosed little bastard who shouldn’t have grabbed him by the neck. The 17-year-old Kluivert told a reporter PSV or Feyenoord will never win again as long as he plays in Amsterdam. The loss PSV brought to Ajax today helps Feyenoord become national champions after 18 years without a title. The fact that their club has influenced the race for championship this way, almost counts as a consolation prize for many PSV-supporters. All in all, it’s been a very enervating Sunday in Eindhoven.