“Should I fire someone today?” asks Niek (14), jokingly. It is clear – he wants to make the most of his day as the CEO of the listed technology company, ‘Neways Electronics’.

Twelve primary and VMBO (pre-vocational secondary education) students took over the reins from directors, CEOs, and politicians in the Eindhoven region for a day. There were more than 200 students involved in this program across the Netherlands. JINC, a non-profit organisation that fights against inequality among young people, initiated this program.

Niek is a student at the Antoon Schellens college in Eindhoven. He was curious to know what it would be like to be the boss of a large company. He replaced Huub van der Vrande, CEO of Neways Electronics. Van der Vrande gave him an exclusive look behind the scenes – from how products are made to the final transport.

However, he also wanted Niek to work; he wanted Niek to look into plans for the celebration of Neways’ 50th anniversary. “What does he really want at that party, and what should we possibly do?”

‘The Boss of tomorrow’ is organised every year. Other participating organisations this year are Philips, DAF, Reinier van Arkel, and DELA. Eindhoven City Councillor, Monique List, also gave up her seat for a day.

Politicians hesitate over ‘Vonk’: ‘Concerns about nature and parking nuisance’

Eindhoven Airport suffers from fog again: ‘Hardly anything can land’ 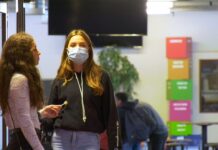 Many millions for the ‘internationalisation’ of schools in the region

3 November 2021
After six months of applying for his dream job, he didn't qualify because he had the wrong nationality. It happened to a Syrian electrical...