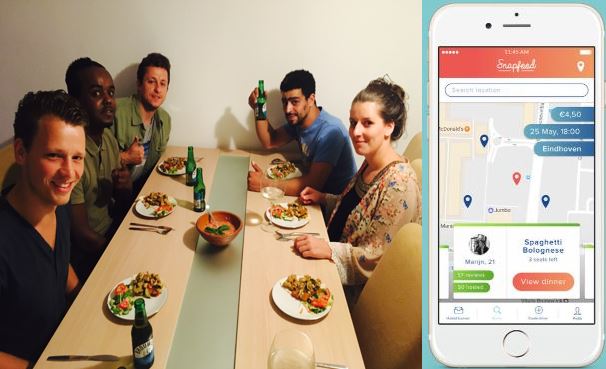 Ever since everybody could afford a smartphone for themselves, our view got narrowed down to Google rather than our surroundings. We don’t get to talk to strangers in the train anymore like in the past. Weirdly though, the Internet has made you talk to strangers more easily at the same time, if you have the right platform; such as Couchsurfing, Airbnb, and Tinder.

At our open weekly meetings, we got a visit from a guy who introduced an application called ‘Snapfood’ that he developed, which partakes in this new way of meeting people through the Internet platforms. If Airbnb is about sharing a spare room you have left in your house, Snapfood is about sharing your dinner. It is a platform through which anybody can organize a dinner event at their houses. Anyone who wants to participate in those events can apply to attend after paying a certain amount of money hosts charge, and the hosts prepare food depending on how many people will come. The concept is pretty simple, but can make many things happen; human connection, chances for people to socialize with others, for expats to introduce food from their own countries and culture. Pieter Hordijk (26), the founder of Snapfood, sent me an invitation to one of the dinners he will attend, so I went to see how it is like.

International food: Trying food you normally don’t get to eat

It was a Somalian-Algerian dinner that I went to. Not knowing what to expect, I went into the complete strangers’ house, in which there are people who I have never met before. They welcomed me, and at the first sight, I knew that I wouldn’t feel awkward tonight in this house. People were very friendly to me and to each other. It felt quite spontaneous being around them who are open-minded to getting to know new people. Holding a glass of wine that the hosts offered me, I could join their conversation right away. 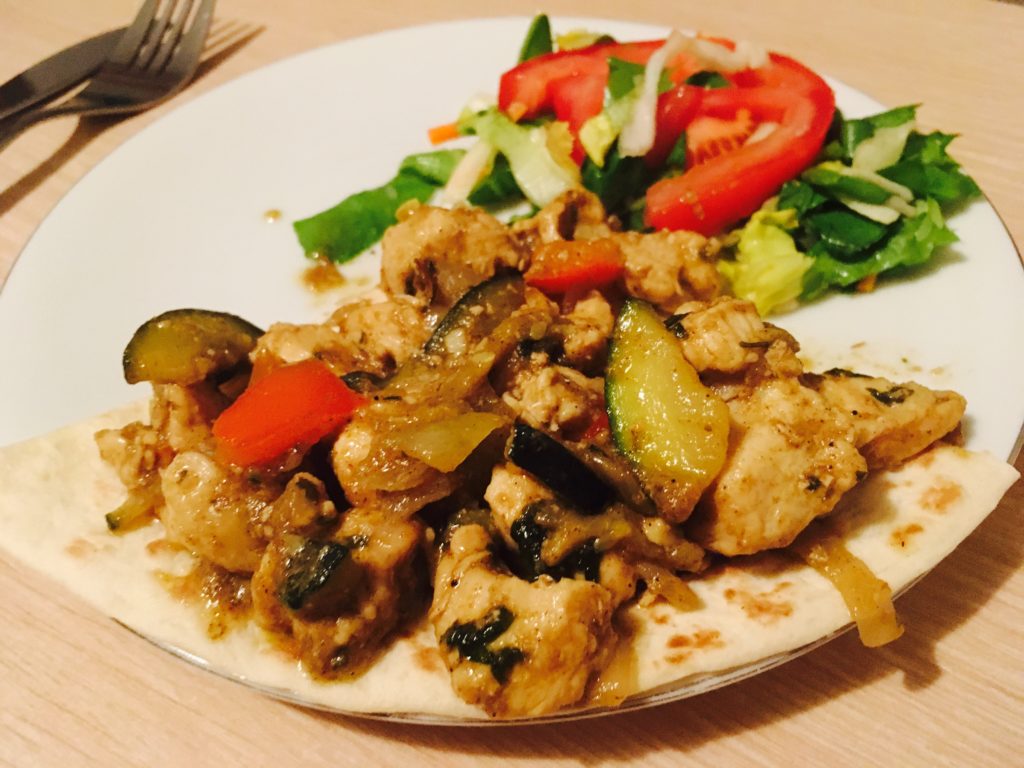 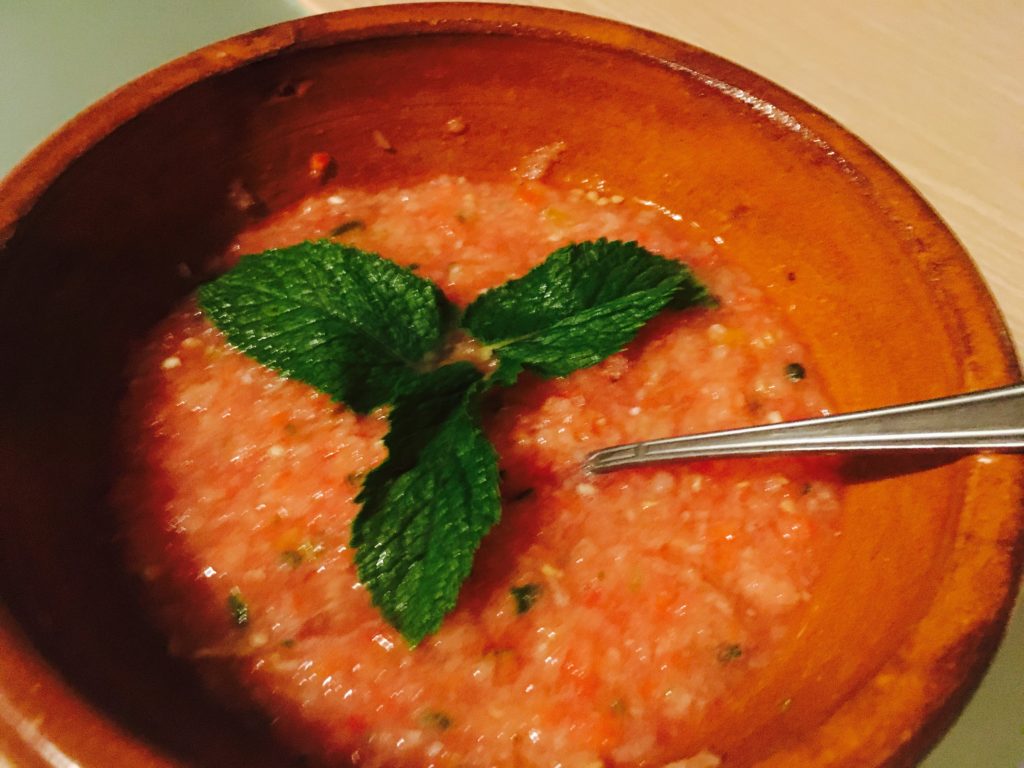 The dinner was ready. Somalian-Algerian dinner would be my first time trying African food. Ahmed Ismail (31), the Somalian chef, introduced his food as a starter (the picture on the left). “Traditionally, we make it with lamb, but I was not sure if everybody has no problem eating lamb meat. So I replaced it with chicken.” said Mr. Ismail. The starter came with spicy tomato sauce (the picture on the right). The food was good, and the spicy sauce was particularly tasty and new, so I had to ask Mr. Ismail for the recipe (tomato, onion, garlic, tamarin, and mint). 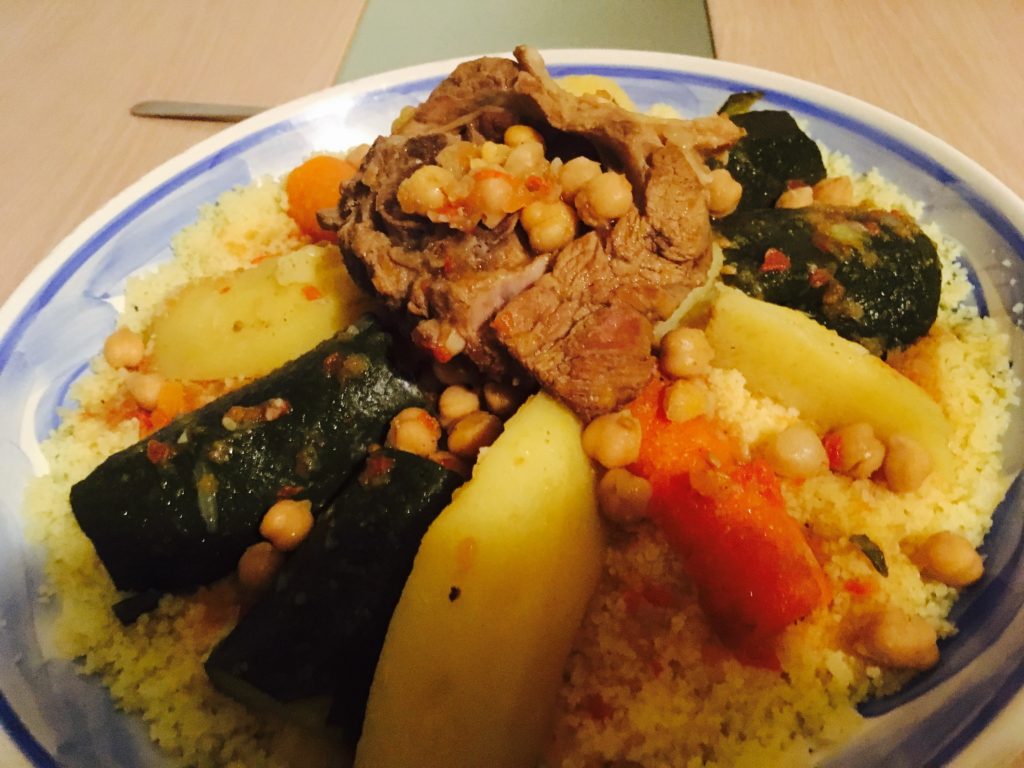 Afterwards, Amor Talbi (30) introduced the Algerian main dish: Couscous cooked in the oven with other vegetables (potato, carrot, beans, and cucumber) and meat. I could see the value of participating in Snapfood events. You get to try new things you normally never get a chance to eat, which can be this delicious. “Since I go to so many international dinner events through Snapfood, my nutrition is diversely well-balanced”, said Mr. Hordijk.

You become friends with others when sharing food

Having conversations during dinner was interesting as well. Everyone had a different background, which turned out to give us so many diverse experiences and perspectives to share. What everybody said about how they handle their lives and deal with situations was very different from how I do with mine. I tried to see what they see from their point of view, through which I got to learn so many things. I realized that things that I find logical can be not even valid to others. For instance, Mr. Ismail, the Somalian chef shared his experiences of working in the kitchen as a cook. “Sometimes they criticize you or scold you in a harsh way, but you can’t take it personally”, said Mr. Ismail, “You take the heat, and move on. If you start letting yourself be offended, you won’t survive the kitchen”. I got to reflect it on myself; how many times have I let so many things get in my way by taking things personally?

How Mr. Hordijk started the business was interesting to listen to as well. Being a 4th year student studying chemistry at Fontys, he one day came up with this idea of developing a dinner organizing platform where people gather up in one’s house and eat together. He hired developers and they cooked up an application. He shared his motto that you become friends with others when sharing food. That is what he hopes people experience through this platform: Sharing food, recipes and strories of themselves. He explained that it has been going well for a business that started only a year ago. Now the business got expanded through Eindhoven, Utrecht, and Amsterdam. About a thousand people are using this application at the moment. “I am hoping to expand the business as widely as possible”, said Mr. Hordijk, “in the future, hopefully, the business gets spread around in the Netherlands, Europe, and it goes global”.

If the era has passed, when it’s ok to walk up to a stranger just to socialize when waiting for your train, then meeting people through sharing-economy-based platforms can be a good alternative. Snapfood can be one of those new tides that you can flow yourself in to meet new people, or introduce your food and culture by inviting others in your dinner table. What makes Snapfood unique is that it is not just about meeting people, but also about trying international food, which means getting to know others better. In other words, you make friends, “foodies” to be exact, through Snapfood. The fastest way they say to earn others’ trust is to try their food. Whose trust do you want to earn next?