A film based on drawings by primary school pupils in the city was shown in the Eindhoven Muziekgebouw. The animation film was musically supported by a professional band.

Drawing
It is part of the project ‘Tekenen voor de Vrijheid‘ (drawing for freedom). Muziekgebouw started the project in cooperation with primary schools from neighbourhoods that could use some attention. All children made a drawing about war and freedom, following a lesson programme by War Child. An artist then made a film of those drawings.

Theme
The band Fuse played the music and there was also a special guest: Zuhoor Tolou, who fled Afghanistan when he was 13 and has been living and working in Eindhoven ever since. He shared his story with the 600 primary school pupils that were present. 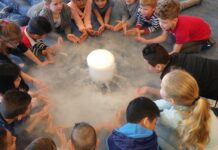 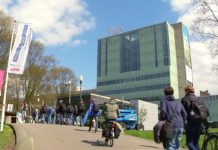 TU/e about ties with China: ‘No question of ending cooperation’