A single-vehicle accident took place on the Libra in Veldhoven on Saturday night. A drunk scooter rider drove off the road, crashed into a pole, and then ended up in the bushes.

That happened around half past three in the morning. The police, an ambulance, the fire brigade, and a trauma helicopter were called to help the victim. After flying around the scene of the accident, the air ambulance returned home. The scooter rider was taken to the hospital by ambulance. The police also attended for driving under the influence. The scooter rider will be charged with driving under the influence. 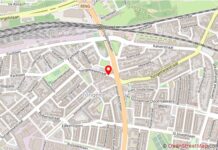