Home NEWS Lifestyle Streets to be named after female scientists

Eindhoven’s getting a new housing project and it needs two new street names.

These will be named after two Dutch female scientists – Dr Caroline ‘Lili’ Bleeker and Tettje (Clay) Jolles. This was a deliberate choice. The area, near Celsius Street, in which this housing project is being built was developed in 1924.

Back then, only male physicists’ names were used as street names. According to the municipality, choosing female names ‘fits in with the city’s inclusivity’. The new street names are those of scientists too. So they fit in with the others in the area.

In 1893, Tettje Clay-Jolles (9 May 1881 – 14 April 1972) became the first female pupil to be admitted to the grammar school in Assen. In 1903 she decided to continue her studies at the University of Leiden but didn’t finish her doctoral exam.

In 1920, she and her family moved to Bandung in Java, then part of the Dutch East Indies. Her husband had been appointed professor of physics at the new Technical High School there. There Tettje worked as her husband’s assistant in the physics laboratory.

She measured the intensity of atmospheric radiation. This work led to important insights into the understanding of cosmic rays. According to Wikipedia, Clay-Jolles helped with the research into vacuum pumps too.

During this time she also edited and typed all of her husband’s publications. In recognition of Tettje’s expertise as a scientist and scholar, Nobel laureate Hendrik Antoon Lorentz hired her in 1921. She edited a series of lectures for him.

Her consultancy firm served as a model for the Netherlands Organisation foundation for Applied Scientific Research (TNO) in 1932.  This scientific and optical equipment manufacturing factory spearheaded the optical industry in the Netherlands. This was previously non-existent.

In 1938, Bleeker started talks with the Dutch military to develop binoculars for them. And in 1939, she and her life-partner Gerard Willemse founded the Nederlandsche Optiek- en Instrumentenfabriek. (NEDOPTIFA).

In 1940, The Netherlands entered World War II. Bleeker stopped producing binoculars because she didn’t want to make anything for the German army. She did, however, continue to develop microscopes for Dutch universities and their students.

Bleeker also hid Jewish citizens in her factory. Eventually, in 1944, someone told the German authorities about this. She misled them, though.

Those she was hiding, successfully escaped. But, Bleeker and Willemse had to go into hiding, and the factory closed down. After the war, she opened a new factory.

This was the first in the world to make the phase-contrast microscope invented by Frits Zernike. NEDOPTIFA became known internationally for its instruments’ high quality of its devices.

Translated and compiled by Melinda Walraven 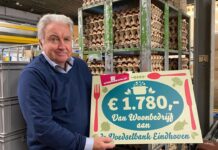