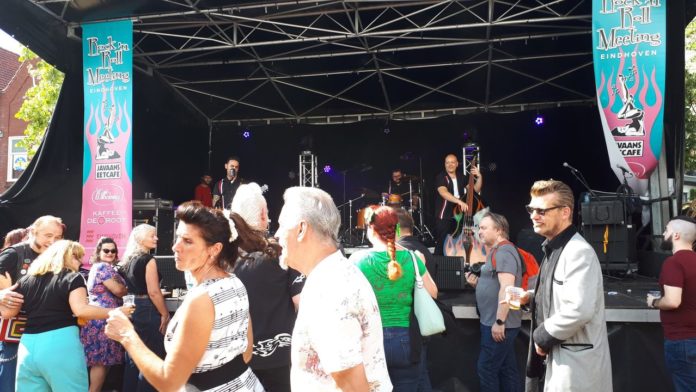 Lovers could return to the time of Elvis Presley last Saturday; high quiffs and oldtimers during the Rock ‘n’ Roll Meeting on Wilhelminaplein Eindhoven.

On the Wilhelmina square several old cars had gathered. There were stalls selling vintage clothes and visitors could freely dance at the stage during the performance of a Brazilian rock band. Some people came not just to relive the past, but also arrived dressed as the rock stars of the time.

Despite the heavy rain, more than enough people came to enjoy the event. All tents were full. According to a visitor that was because Rock ‘n’ Roll is timeless. “The cars, the music and atmosphere remains great”.

When the air was somewhat cleared, visitors could finally enter the dance floor and the party could begin. “But”, a wise visitor said, “I will take it easy, because I still need to drive home”.