Brainport Eindhoven recently hosted almost 3,500 experts at the ITS Congress. This is the largest European gathering centred around smart mobility.

Nowadays, the emphasis is on the real application of innovative technology. For example, on the final day of the Congress, Councillor Monique List announced the launch of the Schwung app. Cyclists can use this app to get a green light sooner at certain traffic lights throughout the city.

The app connects cyclists’ smartphones to traffic lights in the neighbourhood. Usually, cyclists are only detected by the detection plate or by pressing the button at the traffic light. With Schwung, if the situation allows it, the light will turn green faster for the cyclist. The Schwung app is already functional at 100 of Eindhoven’s 175 cycling traffic lights.

Schwung, an innovation from Vialis, also stores a cyclist’s most used route/s. It is a self-learning system. By looking at the history of the cycle route, the app already knows in which direction the request for a green light must be directed. 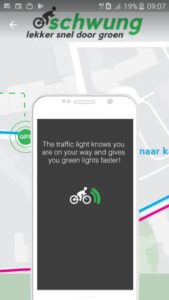 Robin van Wijk, Product Manager at Schwung, says, “With the Schwung app, cyclists can reach their destination faster. The app is offline during the journey, so when you are cycling the app cannot be opened. This prevents cyclists from looking at their mobile phones while cycling.”

“Cycling is a sustainable and healthy way to get around in the city,” Councillor List adds. “We provide an excellent network of cycle paths and good bicycle parking. We have traffic lights with wait time predictors. Schwung fits perfectly with our extensive goals in the area of smart mobility.”

Schwung’s implementation in Eindhoven was made possible with the support of the province of North Brabant. You can find the app in the Play Store or Apple App Store.