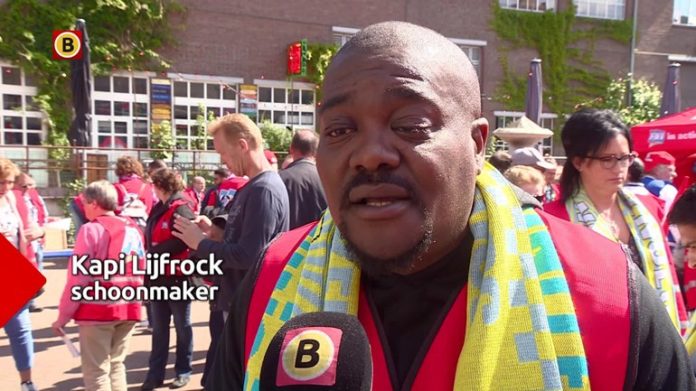 ‘The Netherlands is a beautiful country. It has to stay that way. That’s why I am taking action. I really wonder if they have the Netherlands in their hearts like I do.’

These are the words of Kapi Lijfrock from Eindhoven, who took part in the FNV trade union campaign on Wednesday (29th May).

The age at which you can receive state pension in the Netherlands continues to rise. Kapi’s family, who all work in physically demanding jobs, feel the consequences first hand. Kapi’s father works in the metal industry, his mother in the care sector and himself in cleaning.

He states that ‘research by the FNV (a Dutch trade union) last year showed that half of all people in the cleaning industry will no longer be in good health by the time they receive their state pension. I looked at my colleague and thought: then it will either be you or me [who will be affected]. That thought hit me hard.’

In Kapi’s opinion, the welfare state in the Netherlands is crumbling. ‘The old people who built this country cannot be taken care of properly with the current staff shortages. I find that disrespectful.’

‘I will speak from the heart’

Kapi spoke to the crowd during the strike gathering on Wednesday in Eindhoven. In the morning, he did not know what he was going to say yet. ‘I have written something, but it is not finished yet. But during this strike, it feels like I am with my family. In any case, I know I will speak from the heart,’ he said.

Several thousand workers from the care, metal, building and trading industries, as well as the cleaning industry, gathered at Ketelhuisplein on Strijp-S in Eindhoven.