Among the weekend’s accidents: a serious crash; while a few drivers had to hand their licenses over to Eindhoven’s police.

Sunday evening, two cars were severely damaged in a collision. This accident happened towards midnight; at the crossing of the Gestelsestraat and Boutenslaan.

As the photo shows: one car drove straight into the side of the other one. At the moment, it remains unclear exactly how this accident happened. One of the drivers was taken to hospital by ambulance.

During the past weekend, several drivers had to hand their driving licenses over to police. Some drivers were caught driving while being over the allowed alcohol limit.

Police checked at various spots throughout Eindhoven. One of these was along the Kennedylaan. One driver was found to have more than twice the permitted amount of alcohol in his blood.

Another driver was so drunk, he tried to drive into the grounds of a closed petrol station. When police stopped him, they learnt he was only trying to buy a sandwich.

Police also caught many driving far too fast. This may also result in police confiscating a driving license on the spot. 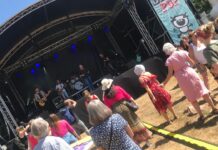