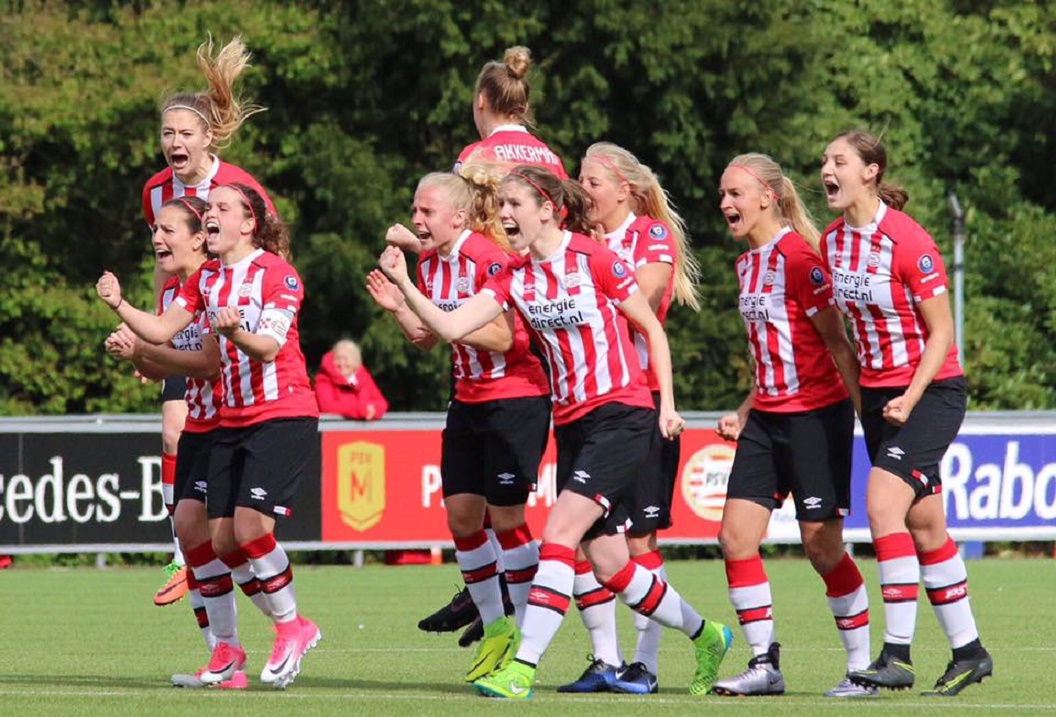 It’s been quite an Easter weekend. While PSV’s ladies are blossoming, the men lose sight on a bright summer and the U21 showed two faces. Here’s what happened.

U21 lose third, but keep sight on second position
PSV’s young talents kicked off their Easter weekend badly. With extra players from U19 instead of backups from the A-selection, the youngsters weren’t able to make a fist any moment on Friday night, and lost their match against low-flyer FC Oss with 0-2. Instead of looking up the charts to possibly take over the second position from Ajax’ U21, the loss caused them to look down and see the seventh place become more realistic than wished for. You can watch the story of this game here.

The perfect moment to get back up their feet was today at 14:30h, with the aforementioned Ajax U21 as direct opponent. After 12 minutes, the team from Amsterdam scored the 0-1 and for a while it looked like PSV’s talents got overtaken by facts. But after 24 minutes, Rosario scored a fantastic equalizer and after 28 minutes, the youngsters were leading with a 2-1, scored by Icelander Gudmundsson. After stoppage time, Ajax tried to get back up their feet, but ironically enough scored the 3-1 through an own goal by Bergsma after a great attack of Gudmundsson again. The numbers 5 till 8 of the Jupiler League didn’t take their chances and PSV U21 solidified their fourth position, now three points after SC Cambuur and five points after Ajax U21 with 3 more matches to go. You can watch the resume here.

PSV Ladies to Cup finals
The ladies kicked off for the semi-finals against SC Heerenveen at 14:30h at Sportcomplex De Herdgang in Eindhoven. Nadia Coolen scored the 1-0 in the fourth minute already, but Heerenveen’s Tiny Hoekstra equalized for the Frisians deep in extra time. Therefore penalties were necessary to get a winner. Eindhoven’s women did it best and claimed their place in the finals with a 4-2 win. After missing their first penalty, goalkeeper Angela Christ (also member of the Dutch ladies selection for the upcoming European Championships in the Netherlands this summer) stopped the Heerenveen-penalty as well. After Lewerissa, van de Wetering and Nouwen scored their penalty for PSV, Christ stopped another Heerenveen-penalty and became the match winner. You can watch the resume here.

PSV’s ladies have now reached the finals, with Ajax as opponent. They lost the finals against the Amsterdam ladies team in 2014, so it’s a great opportunity to set things straight on June 2nd at the Kyocera Stadium in Den Haag. More info about that on this page soon.

PSV men lose game, faith and support
The A-selection messed up some of the final chances on winning the third national title in a row, and even lost sight on a second position. Their game against ADO Den Haag turned out to be symbolic for this season: winger Pereiro scored an early 1-0, but the team couldn’t push through and put the game to their hands. After screwing up several chances to score the 2-0 in the first 45 minutes, things took an even worse turn after stoppage time. The eleven of coach Phillip Cocu started losing control over the game and ADO saw opportunies to keeping points in Den Haag increase by the minute. After their first goal being denied due to offside, Mike Havenaar scored the equalizer in the 87th minute. With an early lead and 63% ball possession, this game showcased everything that went wrong for PSV this season: the lack of killing the game with a fast third and second goal, even losing expensive points in the last minutes of playtime, the season is not what it could have been at all. You can watch the resume here.

Other painful events appeared during and after the game as well: in the 89th minute, Bergwijn entered the field for winger Locadia instead of midfielder Guardado, which caused Cocu to express himself very frustrated against his technical staff. After the match, the players called the season to be ‘over’, whereas Cocu said things aren’t over yet, so it now appears there’s a shattered mindset within the selection. As if it couldn’t be worse, supporters started screaming for Cocu’s head. There’s only one solution to keep things in control until at least early summer: beating Ajax in the Philips Stadium, this weekend, and thereby helping Feyenoord become national champions instead of the Amsterdammers.