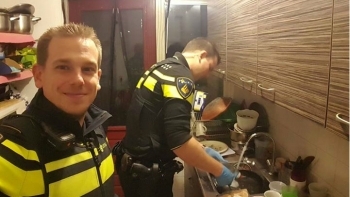 Last November the cops took care of five children whilst their mother had been rushed to hospital because she was suffering from low blood sugar.

The two cops made fried egg sandwiches for the five young children of the mother. This happened in Woensel-Noord. And afterwards they even did the dishes.

The photos of the cops taking care of the household in absence of the mother were posted on Facebook and were viewed and liked by a lot of persons. And will they win the title? This will be revealed on June 3, during the international industry event for safety professionals, eRIC in Twente.