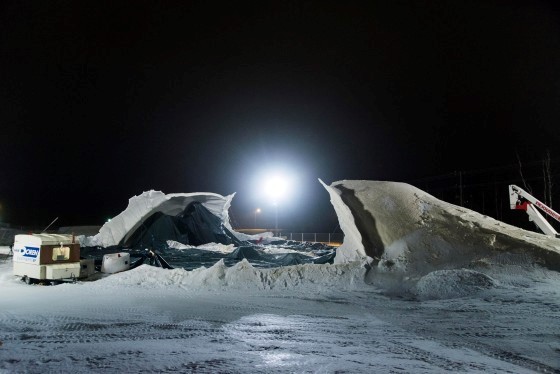 After working round-the-clock shifts since December, a group of Eindhoven students building the world’s longest ice-bridge in Finland saw their plans come to an abrupt end on Monday morning.

Unexpected warm weather dashed the team’s hopes, as their ambitious project thawed and collapsed. ‘There were no accidents and the situation is under control,’ said the team on their official Facebook page.

‘We’re very disappointed but also glad and proud that we were able to work on the project with so many volunteers, companies and universities,’ said project manager Thijs van de Nieuwenhof.

The bridge was based on a 16th century design by Leonardo Da Vinci for a bridge over the river Bosphorus, which was never used. Da Vinci’s design was too advanced for construction techniques at the time.

Built using around 900 tons of ice and paper fiber, the team hoped to test their bridge’s strength by driving a car over it later this month.

This is the third ‘ice project’ in Finland by students from Eindhoven University of Technology. In 2014, the team built the world’s largest ice dome (30 meters across) and last year the highest – an ice church inspired by the Sagrada Familia in Barcelona.