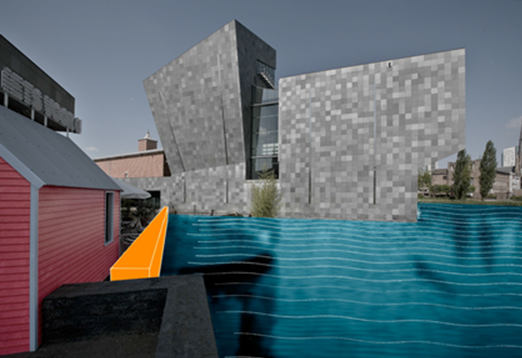 The Van Abbemuseum is to be equipped with a flood barrier, to ensure that the lower part of the building will flood in the event of high water. The water level in the River Dommel, near the art gallery, has risen to its maximum a number of times in the last ten years.

The plastic dam, 33 metres long, is invisible, unless the water level rises to a threatening height, in which case the flood barrier will be automatically raised by the rising water, within only minutes.

Local water authority, Waterschap De Dommel, is investing around one million euros in the project. Any damage to works of art would be irreparable, which is why prevention is less expensive than the potential costs accompanying such a flood.

This is one of a series of precautionary measures being taken by the water authority in the Eindhoven region, in order to ensure our feet stay dry in the city, now and in the future.

The warmer weather results in it raining more often, more heavily and for longer periods. In extreme cases, the River Dommel could burst its banks at low-lying places. The situation would not be life-threatening, but there is an increased risk of flooding and damage to buildings.

Construction on the project starts on 4 January and should be completed by 1 April 2016. Foto: Collectie Rijksdienst voor het Cultureel Erfgoed, Amersfoort, objectnummer 523.803