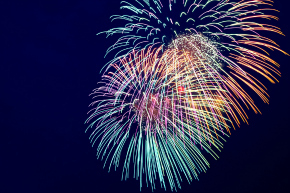 Celebrating New Year can be a time for reflection, nostalgia or a time of forward thinking and dreaming, but never more so than when you are living as an expat.

For me it’s always about saying "goodbye" to the old year, be it with relief or nostalgia, for others it’s about looking to the future and it’s possibilities. Of course celebrating as an expat becomes even more complicated, as you are naturally nostalgic for your own traditions, your friends and family but with this experience comes the initiation into the interesting, sometimes curious, rituals of your adopted "home."

The Netherlanders love to usher the ‘Nieuwjaar’ in with a frenzied, cacophony of fireworks! The first year we were here it was incredible to me that fireworks were routinely played with by children & teenagers, and that there seemed to be no restriction as to when fireworks could be used. I watched, at first, with amusement as the morning began with the neighbourhood "pyromaniacs" joyfully throwing fire crackers in a metal bucket, but my entertainment soon waned after an hour or so, as did my cats tolerance to the loud bangs. They celebrated the new year by spending 48 hours under the bed! Last year the rules were tightened up with the use of fireworks restricted from 6pm on the 31st December to 2am on the 1st January. Every year dozens of people are injured which seems the antithesis of beginning a "happy new year!" but it’s a Dutch tradition so it seems unlikely to end completely.

Other countries celebrate with equal but odd gusto, as I discovered whilst writing this Opinion. In Turkey the wearing of red underwear is de-riguer, which seems safer than playing with fireworks but who knows! Romania try to communicate with animals on New Years Eve for good luck, whilst in Spain they try to fit 12 grapes in their mouths on the stroke of midnight. Colombians drag an empty suitcase around the block in the hopes that the new year will involve travel, and the Danish stand on a chair and jump from it as the clock strikes 12. In the UK we have adopted the Scottish tradition of "First Footing", which involves a tall dark haired man entering the home after midnight, the first visitor of the new year, carrying a loaf of bread, a bottle of whiskey, some coal & salt. All harbingers of prosperity. Of course, the Scottish have Hogmanay, originally a Viking tradition, a party to end all New Years Eve parties that lasts into January 2nd!

Since the millennium cities around the world compete with impressive fireworks displays, which make for stunning viewing throughout the day, so we are back to the ancient Chinese tradition of fireworks, chasing out bad spirits and ensuring good luck.

This years "oud en nieuw" you’ll find me cowering under the bed chatting with the cat, with 12 grapes stuffed in my mouth, wearing red underwear and holding, maybe drinking, a bottle of whiskey!
Happy New Year!