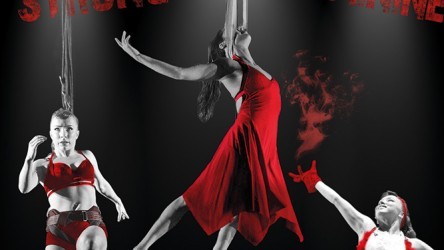 Eindhoven News volunteers went to the dance show ‘No Sweat’ of The Generation Company (UK) in Parktheater. We were invited by Parktheater as a token of appreciation for the friendly and helpful cooperation between Eindhoven News and Parktheater.

These are the comments on the ‘No Sweat’ dance show of the Eindhoven News volunteers :

"It is a combination of acrobatics and a girls’ story. It started with some easy movements, relatively, as it goes. Then it slowly builds up the power. In the end of the show we were so amazed about how they managed to do this. However, it is not only about power and good shapes, it also tries to tell a story. A story in which girls are confused, isolated, and don’t want to be judged."
Yicong

"The performance was powerful and intense. The women had perfect coordination and their diversity added to the brilliance of the show. It is definitely a recommended must watch. Kudos to the performers."
Namratha

"Eight young women are performing in this show with their starring bodies of rhythm and strength. Funky, class and the absence of decoration are highlighting the equilibrium on the ropes. The dancing according the rhythmic movements of a gymnastic ring and around daily life objects (bed) with break-fall protection visible only in one! of the acrobatic exercises were stunning.
If you are a woman or a women admirer (as we all are) you should see this show.
Sonia

"A stunning, unique display of female strength and passion. I was captivated by the quick, graceful movements and energetic soundtrack."
Nicola

"A breath-taking show by eight female machines in immaculate condition. That was very necessary during the gymnastic movements in the up-high ropes and fabric slings. On the floor many acrobatic spectacular actions, like head to head walking around (with the person on top with her feet in the air) with a tray of drinks or throwing each other in the air for a touch of humour.
Sometimes girly but mostly showing female power demanding respect as the narrative behind the show.
I found the dance with the huge loop very beautiful. Dancing in sync with the rhythm of the circling loop and holding on to the loop with both hands and feet while the loop kept on turning. Amazing show!"
Irene

We thank Parktheater a lot for this great opportunity!
Eindhoven News volunteers.