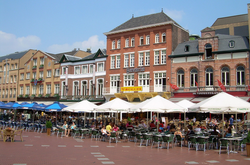 Once graduated, fewer youngsters leave the city, according to a study by the ‘Planbureau voor de Leefomgeving’ (Netherlands Environmental Planning Agency). Thanks to highly qualified people in their twenties and thirties our cities grow again. And also Eindhoven is becoming a city for young people, young couples and families more and more.

For the last fifteen years, highly educated dual earners have no longer massively left their student cities after finishing their studies, as was the case in the seventies and eighties of the last century. They dislike traffic jams and, having to juggle work, family and hobbies, want to have all facilities within cycling distance. Housing developments and renovation projects in large cities have also made living there more attractive.

Some student cities do not succeed in retaining graduates, due to the lousy labour market there, but Eindhoven has less problems: there are enough jobs for technicians in this region.

The rising popularity of Eindhoven is reflected in the development of the age groups living here. Eindhoven has had an overrepresentation of the age group 20 to 40 for many years now, while there is an ageing population in the surrounding area.