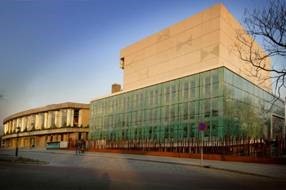 The association of free theatre producers (VVTP) elected Parktheater to ‘Theatre of the Year’. This annual award is presented during the ‘VVTP Theaterbeurs’ (theatre fair) on Monday, January 26th, 2015 at the Beatrix Theater in Utrecht.

The VVTP members assessed all theatres in the Netherlands on the basis of several criteria in the areas of communication, engineering, appearance, hospitality, entrepreneurship and the quality of cooperation between theatre and producer. Within their organisation all staff have been involved in the nomination of the theatres, from artists to marketeers and technicians to production managers and office staff.

The winner of the Theatre of the Year Award receives a specially crafted chair, designed by Carla Janssen Hofelt, and keeps this prize for a year.

Other nominees include ‘Theater De Meervaart’ in Amsterdam, the ‘Chassé Theater’ in Breda, ‘De Oosterpoort’ and ‘Stadsschouwburg’ Groningen, theatre ‘Het Park’ in Hoorn, the Rijswijk theatre and the ‘Luxor Theater’ in Rotterdam.