Home NEWS Executive Board Chairman TU/e looks back on 2014 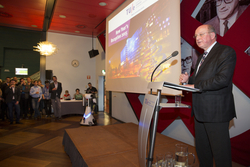 Chairman of the Executive Board Jan Mengelers delivered his first New Year’s speech in the Senate Room on Monday. Mengelers says TU/e can look back on a successful 2014, but in a competitive environment there’s no time to relax. “The workload is equally high, which is a definite point of focus and care for the Board.”

Mengelers delivered his speech partly in Dutch and English. He notably took the time to honour several members of the TU/e community who’d passed away last year, including educational reformer Kees van Overveld, and student Rogier Coolen. The suicide of Spanish designer hopeful Juan López Carcelén in April had upset him the most, Mengelers said. “It’s a feeling of helplessness, because we haven’t been able to offer what universities are here for: presenting young people with a future that matches their talents.”

He acclaimed the increase of first-year students, but also acknowledged the fact that it’s challenging, for teachers as well as regarding lecture room capacity. The growth won’t be financed from direct funding, “but from indirect and third-party funding, which need to be stabilized and expanded.” Apart from the successes in education and research, he touched on the financial issues at Mechanical Engineering and Industrial Design as well. “These are serious financial challenges that require necessary changes, which both Departmental Boards have taken on rather dynamically”, says Mengelers.

Finally, he announced that Professor Theodore Stathopoulos of Concordia University in Montreal will receive an honorary doctorate at the Dies on April 30. Honorary promoter of the Canadian professor of Building, Civil and Environmental Engineering will be Bert Blocken of the Department of Built Environment.