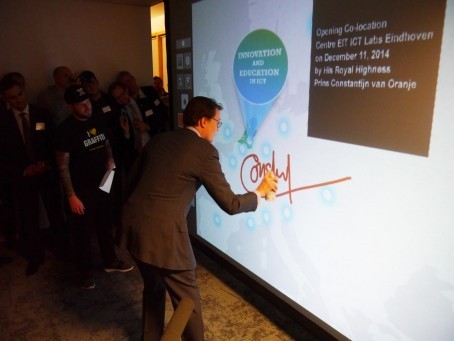 On 11 December 2014, the new Co-location Centre Eindhoven at the High Tech Campus 31 was opened by Prince Constantijn van Oranje.

The Inauguration Event started at 10:00 hrs with an ‘Open House’, in which 24 demos of action line activities, startups and partners were showcased. Through guided tours one could get a quick impression of the innovations and the way-of-working from the two-fold strategy of EIT ICT labs: speed-up the go-to-market ICT innovations and breeding a new generation of entrepreneurial ICT professionals.

The official programme started at 15:00 hrs with a guided tour in which Prince Constantijn van Oranje participated. The tour was followed by a speakers’ programme, with Fred Boekhorst, the Chair of EIT ICT Labs in the Netherlands, as the host and moderator. Willem Jonker, CEO of EIT ICT Labs, was the first on stage. Willem Jonker explained the mission and approach to Innovation and Education in ICT, emphasizing that ICT has become crucial for our society to function, and also to tackle future societal challenges. "Europe has the means to take a leading role in various areas and the hubs of EIT ICT Labs are powerful enablers in this" he stated.

The next speaker was Patrick Strating, Node Director of EIT ICT Labs Eindhoven, who shared a time-line view on the growth of EIT ICT labs in the Netherlands.
One of the EIT ICT Labs Master School students, Charlotte Kortbeek, shared her personal perspective on the future and her view on entrepreneurial education, and described how she found her perfect fit of entrepreneurial education in the EIT ICT Labs Master School.
Henk van Houten, CEO Philips Research, as one of the core partners in EIT ICT Labs introduced the audience to the importance of ICT for new business creation.

Finally, René Penning de Vries, ‘ICT figurehead’ and representative of the Ministry of Economic Affairs, spoke on the role of ICT as enabler and driver for growth in Dutch economy.

Prince Constantijn van Oranje, who is very well connected to the ‘European Digital Agenda’, stated in his inauguration note "EIT ICT Labs is a platform that is able to bridge the worlds of industry and classrooms. It is a platform of co-creation, doing the work that policy makers are talking about in Brussels. As such, working in EIT ICT Labs is not an ordinary job: it is the execution of a mission!"

The Co-location Centre Eindhoven has been established by the partners of the Eindhoven Node: Philips, Océ, NXP, High Tech NL, CWI, TNO, Holst Centre, iMinds, TU Delft, TU/e, Twente and Utrecht University. The Co-location Centre is the result of the scale-up of various EIT ICT Labs activities, such as the business development accelerator, the large scale-innovation activities and the entrepreneurial education activities. The new premises will be the home of project activities in health and wellbeing, coached startups, PhD researchers, master school students, professional learning workshops, and partner meet-ups.