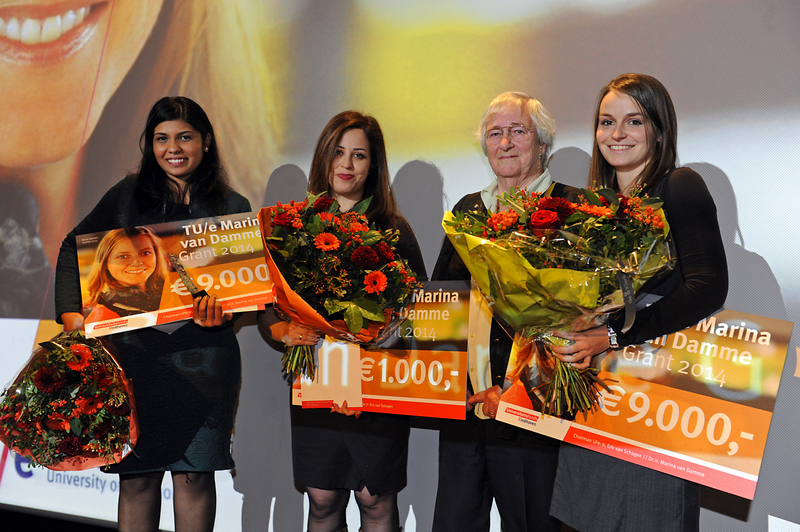 Kavitha Varathan and Chantal Tax have been awarded the 2014 Marina van Damme Grant at TU/e yesterday. Both women received a statuette and a nine-thousand-euro check to carry out their plans from Van Damme herself.

Chantal Tax, Azar Dastouri, and Kavitha Varathan are three female TU/e engineers who were preselected from thirteen applicants. The candidates pitched their plans in De Zwarte Doos this afternoon.

The jury felt Varathan’s plan was the best, because it meets a social need, and is of importance to the entire region. The alumna wants to found an organization for expat-wives that helps them to develop their professional talents to the best of their abilities.

After Varathan had been awarded the check, Van Damme unexpectedly announced Chantal Tax was to receive the grant as well. She’ll be going to Boston to research lattice structures in the nerves.

Van Damme, who usually doesn’t interfere with the choice of the winner, admitted she was fascinated by Tax’ plan, and by the personal invitation she’d received from a professor at Harvard Medical School. "It would be a shame if she had to decline."

Having said that, Van Damme wholeheartedly agreed with the jury’s choice for Varathan. "They’re both excellent candidates. In five years’ time, the quality of applications has never been this high."

The third grant candidate, Azar Dastouri, received a one-thousand-euro incentive from University Fund Eindhoven. "I’m extremely proud of being nominated, and this does not feel like a consolation prize at all", says the mathematician. She wants to use the money for the improvement of highway guardrails.

The Marina van Damme Grant has been initiated by Marina van Damme (1930). Becoming and having a career as an engineer, she was often the only woman in a man’s world. She came up with the grant to help female engineers further their careers. All three universities of technology receive an annual grant.

The reason Van Damme was able to award a second grant, is because already last year she’d announced a new series of five grants to be awarded. The first of these five grants has now been advanced by a year.