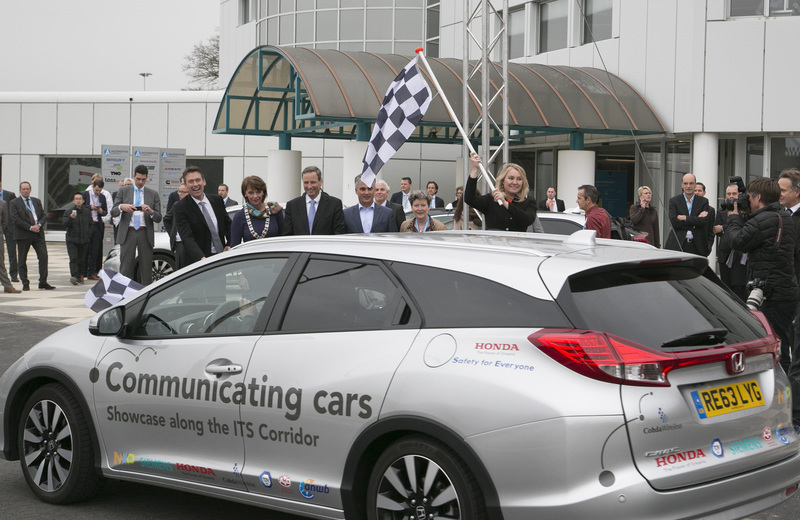 NXP Semiconductors N.V., alongside leading industry partners and government officials, has celebrated the completion of the ‘Communicating Cars’ test drive along the Cooperative ITS (Intelligent Transport Systems) Corridor spanning Austria, Germany and the Netherlands.

The ITS showcase ended in Helmond following a week-long tour which began at Electronica – Europe’s leading electronics trade show – in Munich with industry leaders and high-ranking politicians in attendance. The event saw a convoy of five Honda smart cars start its drive through 1,300km of roads, including ITS test fields in Munich and Vienna, to Helmond. The cars, which were fitted with NXP secure communications technology, demonstrated the benefits of smarter traffic control including improved road safety and traffic flow.

Melanie Schultz van Haegen, Dutch minister of infrastructure and environment, welcomed the cars at the finish line in Helmond and took a test drive. The demonstration showed how the new technology could alert drivers to upcoming road works, oncoming emergency vehicles, pending speed limits and breaking of vehicles ahead, all allowing drivers to take the necessary precautions and avoid unnecessary accidents. This is in addition to the use cases showcased in Munich and Vienna which included traffic light communication, slippery road warning, pedestrian crossing warning, and slow vehicle warning.

Joachim Herrmann, minister of the interior, building and transport in Bavaria, commented: "The earlier a driver is informed of an existing traffic jam on the motorway or of an accident, and the more the driver knows about the traffic flow and the current weather conditions on the road, the fewer accidents will occur."

Minister Melanie Schultz van Haegen: "The Cooperative Intelligent Transport Systems Corridor initiative is an excellent example of European public-private partnership in action. The ‘Communicating Cars’ trial has been a living, breathing example of how we can all work together to make traffic in Europe smarter, safer and greener. We urge stakeholders to recognise the value of Communicating Cars and support this and other ITS initiatives as they strive to transform vehicle transportation across Europe."

Frans op de Beek, chairman of the Amsterdam Group and Principal Advisor Traffic management, Rijkswaterstaat, said: "Cooperative ITS requires the commitment of many partners from different branches of industry and politics. We are very pleased to see that the industry is actively supporting the deployment of these new technologies – recognizing the value of the Communicating Cars initiative and the European ITS Corridor to citizens and governments."

According to Kurt Sievers, Executive Vice President & General Manager Automotive Business, NXP, "Our Communicating Cars initiative demonstrated clearly how we can work with industry leaders and governments to make traffic smarter and safer on European roads." Mr. Sievers continued, "The support our Communicating Cars initiative has received from ministries, motorway operators and the automotive industry across Germany, Austria and the Netherlands, combined with our industry leading secure V2X technology, pave the way for fast deployment of Intelligent Transport Systems across Europe in 2015."

All the information from the "Communicating Cars" tour, partners and reports on the road is available at: http://www.nxp.com/events/communicating-cars.