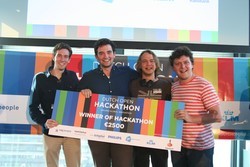 The Welcomehome app, which allows holidaymakers to collect grocery boxes from a luggage belt at Schiphol Airport, was very well-received.

The concept of the Hackathon, an event in Amsterdam with about 360 participants, was to combine services of respected businesses into a new, great product. Participants were given 25 hours to realize their ideas.

The WelcomeHome app saves the holiday destination, checks if a flight is delayed, and at what time the groceries should be delivered. The students also thought of more detailed aspects. "There might be different types of grocery boxes, such as fresh-produce boxes or a Holland box with cheeses and liquorice. For payment we have MyOrder in mind. There is still some work to be done in the logistics area, though."

Schiphol Airport invited the students to present their idea and Ahold, bol.com, Albert Heijn and MyOrder have all shown an interest. Pim, Daan, Stijn and Bart won 2,500 euros and were each given 100 euros to spend at MyOrder.