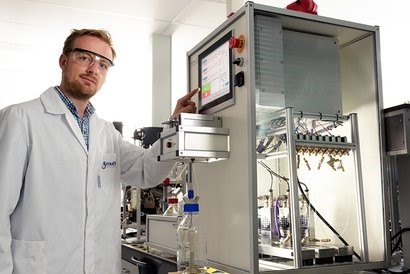 The resulting micro particles all have exactly the same size and medicine content, allowing extremely precise control of delivery. This is very important in applications such as asthma respirators.

Encapsulating medicines is currently still done by mixing oil containing the active ingredient with water. The oil is not soluble in water, resulting in droplets, which are not all the same size. Pharmaceutical manufacturers therefore filter out spheres that are too large or too small, which can account for a loss of around 40% of production. EmulTech has reduced this to 1% of production.

EmulTech technology was invented at TU/e and developed by Robin de Bruijn of EmulTech. The oil mixed with medicine and water is mixed in microscopic channels in a precisely controlled process; the water extrudes tiny droplets which then harden into spheres.

Up until to now EmulTech has produced for pharmaceutical manufacturers.The INFINITY, which has the same size as a small refrigerator, allows companies to carry out their own production using this technology. The company presented the prototype to suppliers and customers at a mini-symposium last Thursday. Describing the name of the product, EmulTech’s Joint founder and CEO Fränk de Jong said: "The name INFINITY is a light-hearted reference to the unlimited possibilities of the system, and its ability to produce continuously."