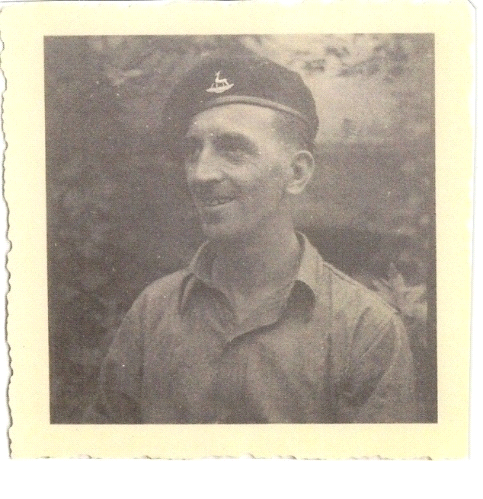 A true story as told by Dorothy Ramser, daughter of of Sgt M. I. Dickson about three British gunners during The Battle for Veghel also known as ‘Operation Market Garden’.

Denys stood with them for a few hours, watching the inky darkness for any hint of movement, until it started to rain quite heavily. The Americans slipped on waterproof ponchos, but Denys had nothing to stop himself getting soaked, so he ran to his jeep which had a tarpaulin cover, to keep himself dry. He slept fitfully for a few hours, until awoken by an American paratrooper asking him if he’d like some coffee. He accepted and drank it whilst munching on his first ever maple syrup pancakes.

In the quiet of the night, the men of the isolated battery were mentally preparing themselves to be taken prisoner, or worse still, being killed. At first light, they were ordered to make for Veghel as quickly and quietly as possible. The crossing into Veghel itself, was over a drawbridge and under portcullis, which was the focus of all the German guns. The plan was to time the crossing of the Battery’s Sexton SP Guns, in between enemy shell bursts. So, with the American paratroopers providing covering fire, the drawbridge into Veghel was lowered and 342 sped through, heads down, helmets firmly on with a prayer on their lips, under withering enemy fire. Miraculously nobody was injured.

Betting had been brisk among 101st US Airborne during the night, as the plight of the battery had become known, as to the chances of 342 battery being marched off into captivity…

It had come to a point in the battle when patrols from both sides were infiltrating each other’s positions almost at will. The village of Veghel was the sad scene of wrecked buildings and burning vehicles. Early that morning a German SP Gun opened fire up the main street, from the other side of the canal, blowing up a petrol tanker on the opposite side of the main street.

Joe Cattini said he once drove with a co-driver for 24 hours from Antwerp to Veghel. It was dark once they got to their destination and they parked the ammunition truck in a big field. The co-driver slept in the truck and Joe dug a slit trench, covered it with the tarpaulin he always carried for this purpose, crawled in exhausted and immediately fell asleep. He slept deeply throughout the night. When he woke up, he emerged from the trench and was puzzled to see the field covered in big pot holes. At that moment his co-driver appeared and asked Joe, "How the hell did you sleep through it??!" "What??" said Joe, "The artillery barrage!!!!". They weren’t pot holes, they were SHELL holes!!