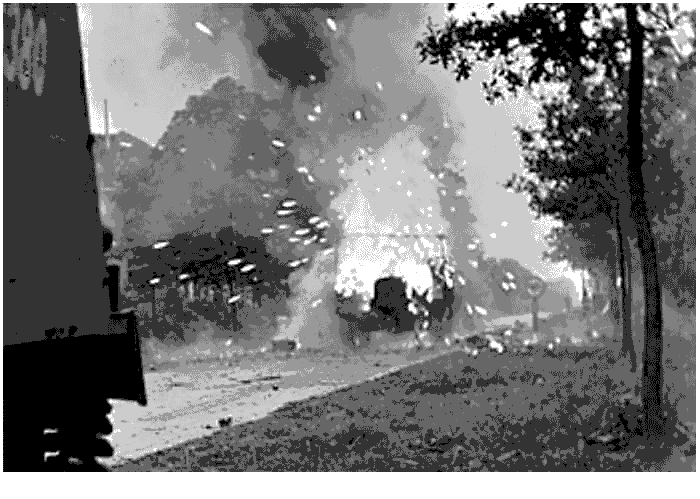 Sgt Michael Dickson, 31-year-old and sergeant of one of the regiments Self Propelled Guns, wrote in a letter to his older brother Francis in the North East of England, of his night with the isolated battery. The tension of complete silence throughout the night, when even the smell of a cigarette could give their position away, got to one of the men, who in his temporary panic, was in grave danger of alerting the nearby Germans as to where they were, was quickly suppressed.

Meanwhile 20-year-old Gunner Denys Hunter, of Battery Commander Major Whitmee’s X Tank, told Dorothy recently, that he was ordered to go and look for them alone and in the dark. So, taking a jeep Denys went off and managed to find the battery’s last known location down a little track in a big field, but discovered that they had moved. He drove off again in the dark, in the direction he hoped they’d taken. After a while he approached a junction, but came to an abrupt and terrified halt, when he was confronted to his horror, by the sight of Panzer Grenadiers blocking the road – and they were definitely looking his way. Survival instinct and adrenalin kicked in, and Denys threw the jeep around, pressed the accelerator to the floor, gunned the engine and hurtled round the bend in the road under a hail of enemy gun fire.

He eventually got back to Veghel, he explained to Dorothy, and saw that the 101st US Airborne Division had set up a checkpoint, with an Anti-Tank Gun in the middle of the road. There was a wood on the left beside the road block, with a wide road running alongside, so he parked the jeep there and went to identify himself to the paratroopers. Once that formality was out of the way he went to the warehouse that housed 101st US Airborne’s HQ to report to Major Whitmee.

At the entrance he was challenged by a sentry, but was then allowed to enter. HQ appeared empty, but as he walked in he could see a faint light over in one corner, so he walked towards it and discovered the camp cookhouse. The only one lying awake was Signaller Williams of X Tank, who gestured towards a peaceful, blanketed figure and whispered "The old man’s asleep" meaning Whitmee, so Denys told Corporal Williams about not locating the battery and returned to the Americans manning the road block, who’d asked for his help identifying the battery, should they manage to get to Veghel.

In the picture: British Truck brewed up on Hell’s Highway – Imperial War Museum