Home NEWS What is the role of humour in negotiations- 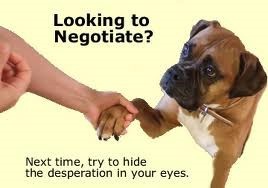 What is the role of humour in either high stakes or less binding negotiations like in distributive negotiations?

(Distributive negotiation: to simplify the win-lose approach associated to a short-term vision).

In any type of situation and mostly for Anglo-Saxon and some of the European countries, the use of humour obviously creates an informal and relaxed atmosphere, an easy and cool attitude which can be an ice breaker if well managed (with tact). It can be useful before starting the negotiation process and dealing with the hurdles of the problem.
According to W. Ury, a worldwide recognized negotiator and lecturer, author of the best seller ”Getting to a Yes”, the problem is what makes you negotiate in the first place.

The use of hunour is also a subtle way of evaluating the profile of your negotiation partner.

Humour can lead to an intellectual/emotional form of tacit mutual understanding before reaching a certain level of trust, compulsory for integrative negotiations (win-win outcome approach) and even for some win-lose approaches.

In business contexts, as in every social or private context, humour has also a limit; better to avoid repetitive sarcastic although hilarious remarks in a business context unless you are a talented movie star called George Clooney directed in the movie ”Intolerable Cruelty”.

Seriously, joking seems somehow related to the use of power where the one who dares to show some assertive tactful intellectual relaxation or humour will take the edge during the hurdle of the negotiations compared to a more rigid counterpart. Remember the U.S. President, Barack Obama, presenting surprisingly the Lion King cartoon during a highly formal meeting in order to joke cleverly about his African origins, knowing that political adversaries and some lobbyist, all present at the meeting, were attacking him about his legitimacy toward the American people regarding his origins.
A relaxed way of saying, ‘enough pettiness …’

The use of humour can cleverly and ironically emphasize exaggerations toward escalating demands/figures.

For many cultures and people, joking is a positive habit, but it is also seen by many people as artificial and inappropriate.

Conclusion :
Sympathy shown using humour paves the way to what can constitute intellectual and pragmatic possibilities, a positive introduction to the hard work of the negotiation process, it can lead the negotiations toward a collaborative approach essential for an integrative type of agreement.

Last but not least :
Like with the Lion King interlude, humour can divert an inappropriate or embarrassing topic and drive the audience or the negotiations partners toward a more interesting and upgraded debate.