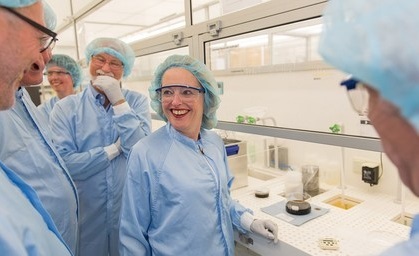 Jet Bussemaker Minister of Education, Culture and Science visited the Eindhoven University of Technology (TU/e). The Minister was visiting participants of the Gravitation (‘Zwaartekracht’) projects.

The forum discussion was followed by the presentation to the Minister of a framed wafer showing her portrait (a thin silicon disk from which ICs are made). She had processed the wafer herself during her visit to the cleanroom of the TU/e NanoLab. The NanoLab has a central role in photonics research in the Netherlands.

Bussemaker granted Gravitation subsidies to the programmes involved with TU/e: The Research Centre for Integrated Nanophotonics, Networks and the Netherlands Centre for Multi-scale Catalytic Energy Conversion and the Functional Molecular Systems programme.