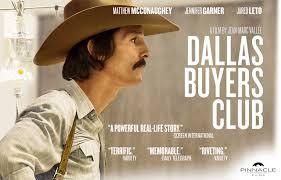 When I started watching Dallas Buyers Club I was reluctant to like it. Really not a fan of Matthew McConnaughey. And I still don’t think he deserved the Oscar but now I think Jared Leto is the real winner. What a sublime performance Leto gives as the junkie Rayon. Truly breathtaking.

It’s the real story of activist (and racist & homophobic) Ron Woodroof’s life. He got diagnosed with was known as ‘homo-disease’ AIDS in 1986 and had a short time to live. Ron wasn’t ready to accept this grim prognosis. He tried various kids of drugs- and medical combinations and prolonged his life with six years. Mainly due to the fact he also smoked, drank and snorted cocaine on a regulair basis.

The hospitals that treated AIDS victims used AZT, the only medicin available at that time; little did the doctors know about dosage and side effects.

Woodroof found out that AZT ‘makes you crazy and burns the brain’ and when he goes to Mexico he finds Dr.Vass who gives Ron treatments that make him feel much better. It is a combination of antivirals, dextran sulfate and Procaine PVP.
FDA didn’t approve some of it and Woodroof imports them from other countries. Not only for himself but also for everybody who needs them.

Together with his friend Rayon he forms the Dallas Buyers Club, an underground network for fellow patients. You pay $ 400 and you are a member. Then you get the medicins for free.
FDA tries to close him down when they see lines around the block and the profits to be made.

Woodroof always claimed never to work for the money but to give others that what he took and made him feel good.
Jennifer Garner plays Eve, a doctor in the hospital that treats AIDS patients with ATZ and she sees the benefits of the stuff Ron sells. She becomes friends with Ron and ‘helps’ him with her prescription pad.
I frowned upon one scene where Eve drinks from the same bottle as Ron. Nobody would do that at that time.

Weird thing about this movie is that I have lived this story when my friend Richard got AIDS in 1984. Nobody knew what kind of disease it was and how to go about it. Rock Hudson was at UCLA hospital with ‘pneumonia’ and my friend was two doors down. Therefore Dallas Buyers Club was a trip down memory lane for me.