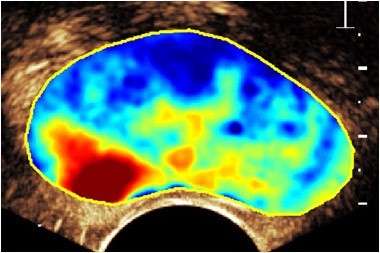 Each year prostate tissue samples are taken from over a million men around the world to diagnose prostate cancer.

The medical procedure, using 12 large biopsy needles was recently described by an American urology professor as ‘barbaric’. The examination is unnecessarily painful and dangerous and results show that 70% of the subjects do not have cancer.

Research team leader Massimo Mischi from TU/e, University of Technology Eindhoven in association with the Academic Medical Center Amsterdam have developed a patient-friendly examination method using existing ultrasound scanners which drastically reduces the need for biopsies, and may even eliminate them altogether.

Patients are given a single injection of a contrast medium containing tiny bubbles, which can be seen by an ultrasound scanner right down to the smallest blood vessels. Using advanced image-analysis techniques that recognize the characteristic blood vessel pattern in tumours, the computer then generates an image showing where the tumour is. The examination only takes one minute, and the results are available a few minutes later. These examinations save money and costly biopsy analysis is no longer necessary.

Researchers were able to compare the ‘tumour images’ from 24 patients at three hospitals in the Netherlands. The images were found to give a good indication of the locations and sizes of the tumours.

Once the new method patented by TU/e has been sufficiently proven in clinical practice, the need to do biopsies could be eliminated entirely and the method made available from 2016 for other patients.

Massimo Mischi received funding from the NWO (Netherlands Organization for Scientific Research) in 2009 for his research. In 2011 he was awarded a Starting Grant from ERC, the European Research Council. The Dutch Cancer Society (KWF) provided a four year grant for further research in 2013.