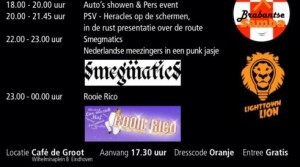 Next week the Wilhelminaplein (Wilhelmina Square) in Eindhoven will be the place for a send-off to the participants of the Oranje (Orange) Trophy, the journey of Dutch supporters going to the World Cup in Brazil.

As many as seven teams from Brabant will be going to Brazil. They will travel in orange vehicles, hence the name, traversing 14 countries on three continents, a total of 25,000 kilometers.

Next Friday people can wave good-bye to these teams. At six o’clock in the evening the vehicles will be lined up on the Wilhelminaplein and after this the soccer match PSV- Heracles can be viewed on a big screen.

The following day the convoy of Brabant participants is going to drive to Amsterdam and from there will take part in the national Orange Trophy prologue in Rotterdam. There the vehicles will be transferred to containers in order to be shipped to New York .

From New York, the Orange Trophy will travel to Brazil. Precisely 80 days after departure, the convoy will arrive in Salvador de Bahia in Brazil, where the Dutch national team is playing its first group match against rival and world champion Spain.